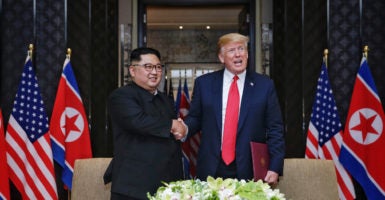 President Trump says the summit went “better than anybody could have expected." (Photo: EPN/Newscom)

Trump made his comments at a ceremony during which the two leaders signed what Trump called a “comprehensive” and “historic” agreement, a document that offers North Korea an opportunity for improved relations and security guarantees in exchange for commitment to “the complete denuclearization of the Korean Peninsula.” The president said  the denuclearization process will begin “very quickly.”

“He is a very worthy negotiator,” Trump said of Kim, further remarking, “We’ll meet many times.”

The Trump administration had previously stated that Tuesday’s summit was not a one-and-done deal, with various officials explaining that achieving desired results will be a process.

Trump said he will invite Kim to the White House at the “appropriate time,” suggesting that Kim is open to such a visit to the U.S.

Prior to the landmark summit, which kicked off Tuesday morning with a remarkable handshake between two men who were ready to wage war against one another this time last year, Trump told The Daily Caller that he would “certainly” invite the North Korean leader to the White House if the meeting went well.

Trump seemed particularly pleased with the summit. During a walk with Kim before the signing, Trump told reporters that the summit has gone “better than anybody could have expected,” adding that there had been a lot of progress.