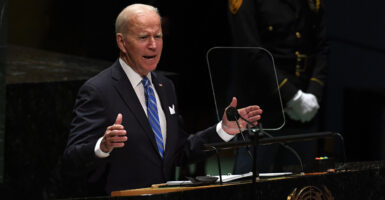 "As a global community, we are challenged by urgent and looming crises, wherein lie enormous opportunities if—if—we can summon the will to seize these opportunities," President Joe Biden tells the 76th session of the United Nations General Assembly on Tuesday at U.N. headquarters in New York City. (Photo: Timothy A. Clary/Getty Images)

An embattled President Joe Biden arrived Tuesday for his first address to the United Nations General Assembly with the recent rebuke of allies for his botched exit from Afghanistan, a security crisis at the southern U.S. border, and his domestic agenda in stalemate largely because of his own party’s infighting.

In his speech, Biden sought to promote America’s desire to be more engaged in global institutions such as the U.N. and the World Health Organization and multinational pacts such as the Paris climate accord and the Iran nuclear deal.

The president also focused heavily on climate change and, while under criticism at home for his vaccine mandates, fighting COVID-19 and future pandemics.

Here are four big takeaways from Biden’s speech at the United Nations.

1.  ‘Interconnected … as Never Before’

Biden said countries must work together to fight COVID-19 as well as future pandemics, calling for a global health threat council to monitor emerging pandemics.

“Bombs and bullets cannot defend against COVID-19, or its future variants,” Biden said. “To fight this pandemic, we need a collective act of science and political will. We need to act now to get shots in arms as fast as possible and expand access to oxygen, tests, treatments, to save lives around the world.”

As a global community, we are challenged by urgent and looming crises, wherein lie enormous opportunities if—if—we can summon the will to seize these opportunities. Will we work together to save lives, defeat COVID-19 everywhere, and take the necessary steps to prepare ourselves for the next pandemic?

For there will be another one. Or, will we fail to harness the tools at our disposal as a more virulent, dangerous, variants take hold?

In what seemed like a signal to other world leaders of a departure from the Trump administration’s “America first” approach, Biden focused on nations’ “interconnected” goals.

“Our security, our prosperity, and our very freedoms are interconnected, in my view, as never before,” Biden said. “And so, I believe we must work together as never before.”

2. Climate ‘Point of No Return’

Biden became somewhat hyperbolic on the threat of climate change during his address, in which he referred to U.N. Secretary-General António Manuel de Oliveira Guterres of Portugal.

“This year has also brought widespread death and devastation from the borderless climate crisis,”  Biden said. “The extreme weather events that we’ve seen in every part of the world, and you all know it and feel it, represent what the secretary-general has rightly called ‘code red’ for humanity. And the scientists and experts are telling us that we’re fast approaching a point of no return, in a literal sense.”

Biden said that the United States would be a leader in financing climate projects across the globe, but called for the U.N. General Assembly to join the fight to avoid a catastrophe.

“Will we meet the threat of challenging climate, of challenging climate we are all feeling, [which is] already ravaging every part of our world with extreme weather? Or will we suffer the merciless march of ever-worsening droughts and floods, more intense fires and hurricanes, longer heatwaves and rising seas?” the president said.

While the hasty U.S. departure from Afghanistan has been widely criticized by international government officials, Biden cast the withdrawal as a step forward—asserting that war should always be a last resort:

Instead of continuing to fight the wars of the past, we are fixing our eyes on devoting our resources to challenges that hold the keys to our collective future. Ending this pandemic, addressing the climate crisis; managing the shifts in global power dynamics; shaping the rules of the world on vital issues like trade, cyber, and emerging technologies; and facing the threat of terrorism as it stands today.

We’ve ended 20 years of conflict in Afghanistan. And as we close this period of relentless war, we’re opening a new era of relentless diplomacy.

The president also acknowledged the suicide bombing by the ISIS-K terrorist group at the airport in Kabul, Afghanistan, that killed 13 U.S. service members and almost 200 Afghans.

But he said the United States is more prepared to address the threat of international terrorism than it was when the 9/11 attacks occurred in 2001.

Although the United Nations has been known for tolerating dictatorships and China, Cuba, Venezuela, and Russia currently are members of the U.N. Human Rights Council, Biden praised the institution as sharing America’s commitment to freedom. At one point, though, he appeared to refer to the U.N. as the U.S.

Although he did not mention China, the largest strategic competitor to the United States, Biden did assert that the U.S. is not seeking a “new Cold War.”

“The United States will compete and will compete vigorously and lead with our values and our strength,” Biden said, adding:

We’ll stand up for our allies and our friends, and oppose attempts by stronger countries to dominate weaker ones, whether through changes of territory by force, economic coercion and technical exploitation, and disinformation.

But we are not seeking, I’ll say it again, we are not seeking a new Cold War or a world divided into rigid blocs. The United States is ready to work with any nation that steps up and pursues peaceable resolution to shared challenges, even if we have intense disagreement in other areas.