The UN Funds Repressive Regimes at the Expense of US Taxpayers 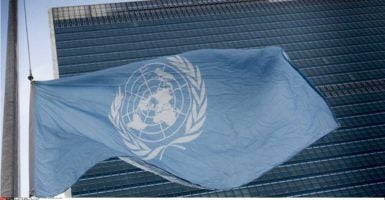 A new report shows how the U.S. contributes more money to the U.N. than it spends on shipbuilding for the Navy, yet there is a huge disparity in what it receives back compared to many repressive countries.

The United Nations recently released a report detailing the countries of registration of the recipient vendors of $17.6 billion the U.N. system spent on goods and services in 2015.

The report received some modest attention in the press. However, the general unfamiliarity with the U.N. can lead to misunderstandings about what information this report was actually providing. For instance, a Forbes article misinterpreted the report as one listing which countries contribute most to the U.N. system. This misinterpretation inspired this article piece to illustrate the difference.

Unfortunately, the U.N. system does not report its revenues as frequently as it does procurement. Analysis requires going back to 2013, which is the last year that both procurement and revenue data were published by the U.N. Chief Executives Board for Coordination.

In 2013, the U.N. system procured $16.38 billion in goods and services (the summary page for procurement of goods says $16.1 billion, but the dataset yields the higher number) and (after eliminating duplicate information for Aruba, the “State of Palestine,” the Republic of Korea, and the Holy See) $53.9 billion in revenues from governments in 2013. In other words, in 2013 the U.N. system spent about 30 percent of the revenues received from governments on goods and services.

Many nations benefit significantly from this system, receiving far more from the U.N. than they pay into the system in contributions. For instance, a Swiss news outlet observed, “Switzerland is the United Nation’s fourth-biggest supplier, behind only the United States, India, and the United Arab Emirates, providing almost 5 percent of all the world body’s goods and services in 2015.”

The U.S., by contrast, suffered a huge discrepancy between what it put into the system and what it got back.

But what about the other U.N. member states? The table below lists the 15 biggest winners and losers of the 193 member states. The number of pariah states listed among the largest winners of U.N. procurement is shocking. Sudan, Syria, and Zimbabwe—each among the most repressive nations on Earth—all earned over $100 million more from U.N. procurement in 2013 than they paid into the system. Is it appropriate for the U.N. to provide these governments a financial lifeline by purchasing so much from vendors in their countries?

The predominance of large contributors to the U.N. system among the biggest losers was not a surprise, although the size of the differences between procurement and contributions was unanticipated.

To put the amount in perspective, the total amount budgeted by the U.S. Navy for shipbuilding in fiscal year 2013 was $13.8 billion.

The point of U.S. membership in the U.N. is not to reap a positive return on U.N. procurement, but this discrepancy should be noted when politicians talk about how much the U.S. benefits from the U.N.

The growth of U.N. procurement should also be an incentive for implementing far more stringent oversight of U.N. procurement considering that a recent report by the U.N. Joint Inspection Unit found that most U.N. organizations have “a fragmented, often ad hoc and incoherent approach to combating fraud” and were in a “state of near denial” about fraud and theft.

That reporting requirement lapsed in 2011 and President Barack Obama’s administration stopped compiling and releasing this information. The last published report by the Office of Management and Budget was for fiscal year 2010, which totaled U.S. contributions to the U.N. system at $7.692 billion. But the U.N. reports that U.S. contributions to the U.N. system in 2010 totaled $10.07 billion.

A difference of $2.36 billion is no rounding error—it is an enormous gap. There may be a legitimate explanation, perhaps involving the difference between fiscal years and calendar years, but Congress should ask the Office of Management and Budget to provide an explanation.

The bottom line, however, is that between 2010 and 2013, U.S. contributions to the U.N. system increased somewhere between 50 percent and 100 percent. Who knows if they have increased even further between 2013 and 2015? Congress and the American taxpayers certainly do not know because the law requiring the administration to report on such contributions has lapsed and the administration apparently has no interest in voluntarily releasing this information.

The United Nations has a well-earned reputation for opacity. But in at least this respect, it beat the “most transparent administration” in history.

The very foundation of government oversight is transparency. As steward of U.S. taxpayer dollars, Congress should enact a permanent annual reporting requirement on all U.S. contributions to the U.N. system to be conducted by the Office of Management and Budget, and use that to rigorously track U.S. contributions to the U.N. and verify that they are justified and supportive of U.S. interests.