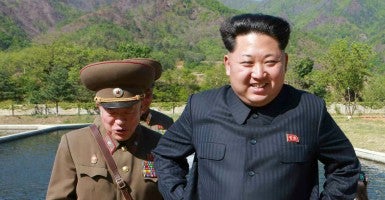 Kim Jong-un continued his reign of purges, having Minister of Defense Hyon Yong-chol executed for treason and showing disrespect to the North Korean leader by falling asleep at a military event.

South Korea’s National Intelligence Service reported that Hyon was executed at the end of April by a firing squad using anti-aircraft artillery as hundreds of witnesses watched. Hyon’s execution follows reports that Kim Jong-un had 15 senior officials executed earlier this year for challenging his authority.

Vice Marshal Hyon served as chief of the General Staff from July 2012 to May 2013, then was removed from office and demoted, only to resurface as minister of defense in June 2014. At the time of his death, he was also a candidate member of the Korean Workers’ Party Political Bureau and a member of the Party Central Committee.

During his three years in power, Kim Jong-un has purged hundreds, perhaps thousands of officials. Even the senior-most level of government is not safe from Kim’s wrath. He had his uncle Jang Song-taek, purportedly the “second most powerful man in North Korea,” executed in December 2013. Kim has replaced the minister of defense and chief of the general staff five times each.

Kim Jong has shown he is just as merciless as his father and grandfather in subjugating the populace. He has increased public executions, expanded the gulags for political prisoners and increased government punishment for anyone caught with information from the outside world.

The U.S. Committee for Human Rights in North Korea published a report with satellite imagery apparently revealing an execution of officials by anti-aircraft artillery at a military facility last October.

Kim Jong-un has maintained his father’s policies but appears to be implementing them in a more brutal, volatile and unpredictable way.

Hyon’s execution, like that of his uncle Jong Song-taek, will spur renewed debate over how firm Kim’s hold on power is and the stability of the North Korean regime.

Some experts perceive Kim’s actions are reflective of a weak, embattled ruler desperately fighting off challengers and attempted coups. But it is more likely that Kim is firmly in control and confident enough to take out even the most senior strata of regime leadership.

Kim would have been weakest immediately after his father Kim Jong-il’s death in December 2011. But after Kim Jong-un acquired each of his father’s six important titles—signifying control over the government, military and party—it became increasingly more difficult for potential challengers to oust him.

Like his father and grandfather, Kim is playing rivals off against each other to eliminate real or perceived challengers. Kim Jong-un has maintained his father’s policies but appears to be implementing them in a more brutal, volatile and unpredictable way.

But Pyongyang has displayed a remarkable ability to withstand domestic and international threats. Regime change in the foreseeable future is unlikely due to the pervasiveness of North Korean security services, the lack of a viable opposition party or movement, and the state’s absolute control over information sources.

The South Korean Ministry of Defense noted that they have detected no unusual military activity in North Korea following Hyon’s execution.