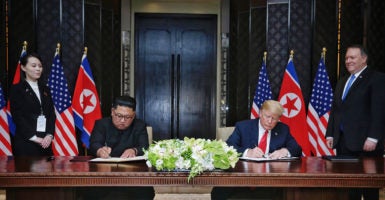 Only a few tangible outcomes emerged from the Singapore summit between President Donald Trump and North Korean leader Kim Jong Un. One of those was Trump’s announcement that “we will be stopping the war games, which will save us a tremendous amount of money.”

Trump went on to add that the games will be halted “unless or until we see the future negotiation is not going along as it should.”

Left unsaid was exactly which “war games” the president is referring to. Most believe that the large, annual joint military exercises regularly conducted between the U.S. and South Korean military forces fall under that definition.

Ulchi Focus Guardian, one such exercise, normally takes place in the fall and last year involved a total of around 20,000 U.S. personnel, either already in South Korea or arriving from off-peninsula to train with the South Koreans. Another such exercise, named Foal Eagle, normally takes place in the spring and involves a similar number of U.S. personnel.

But it was unclear whether the phrase “war games” also includes lower-level exercises, such as field training exercises by a U.S. battalion or squadron.

The large joint exercises ensure that U.S. and South Korean forces, as well as select allied forces who are part of the United Nations Command, are able to work seamlessly together to defend South Korea from attack. These are necessary to ensure the interoperability and integration of operations.

Wartime plans for the defense of South Korea combine air, ground, and sea forces of multiple nations, and as such, periodic exercises are necessary to ensure readiness and preparedness.

Suspending these large joint exercises for an extended period of time, particularly for more than six months, could erode the readiness of U.S. and South Korean forces to successfully work together to defend South Korea. If the president’s use of the term “war games” is applied more expansively and encompasses lower-level exercises, the negative impact on readiness will be more immediate and severe.

North Korea has traditionally objected to the large joint exercises and has in the past expressed its displeasure by launching ballistic missiles or issuing blistering communiques. Although these exercises are strictly defensive in nature, North Korea has referred to them as “dress rehearsals” for an invasion.

Because ceasing these exercises would erode the U.S. and South Korea’s ability to defend the peninsula, The Heritage Foundation has consistently recommended that the U.S. not accede to North Korean demands to cancel them unless the north shows more tangible signs of seriousness in seeking peace and stability.

The financial cost of these exercises is simply the price the U.S. must pay to defend its global national interests. The South Koreans pay their share of the exercise costs.

There is more to learn about the president’s agreement with Kim, and it would be premature to read too much into it. But canceling military exercises before North Korea has taken any concrete steps to demonstrate its intentions would be troubling.