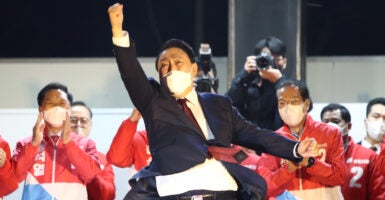 South Korea concluded a bitterly divisive presidential campaign season Wednesday with the election of Yoon Suk Yeol. Both he and his opponent, Lee Jae-myung, engaged in a battle of mudslinging and accusations, making this an acrimonious campaign. Both candidates were highly unfavorable, making this a true “election of the undesirables.”

The contest was unusual since, for the first time, neither candidate had legislative or Cabinet experience, nor were seen as reflecting the mainstream of their party. Both were unconventional candidates, but their foreign and security policies were conventionally conservative and progressive, pro-U.S. and less so, respectively.

Yoon, of the conservative People Power Party, will bring South Korea’s foreign and security policies into greater alignment with those of the United States. This holds great promise for improved coordination on issues related to the U.S.-South Korea alliance, including bilateral policy toward North Korea and China.

Yoon sees a strong alliance with the United States as the basis for South Korea’s foreign relations with North Korea, Japan, and China. He criticized incumbent President Moon Jae-in’s premature push for a return of wartime operational control of South Korean forces from the United Nations Command prior to Seoul having fulfilled agreed upon conditions. Instead, Yoon advocated for strengthening the alliance by resuming bilateral military exercises, which have been curtailed since 2018.

Yoon also disagreed with Moon and progressive candidate Lee’s advocacy for offering benefits and concessions to North Korea in hopes of inducing the regime back to the negotiating table. While Yoon called for continued diplomatic outreach to Pyongyang, he instead conditioned any benefits on attaining negotiated progress toward North Korean denuclearization. He rejected having any more photo-op summits without prior diplomatic progress.

The conservative candidate dismissed Moon’s and Lee’s proposal for an end-of-war declaration with North Korea as a meaningless gesture if it wasn’t accompanied by progress toward reducing Pyongyang’s military threat to South Korea. Yoon also indicated he would resume South Korean criticism of North Korean human rights violations, which had atrophied under progressive administrations.

Yoon indicated a greater willingness than Lee to reach out to Tokyo with fewer conditions, striving to separate historic issues from present-day security and economic cooperation. The United States has been engaged in behind-the-scenes efforts to bring about reconciliation of America’s two important allies to enable trilateral military cooperation toward the growing Chinese and North Korean threats.

A Yoon presidency may lead to South Korea being more willing to assume a larger regional security role. Seoul has been reluctant to antagonize Beijing, and more recently, Moscow, due to concerns over the impact on its economic interests or jeopardizing Chinese and Russian support for facilitating improved inter-Korean relations.

Yoon indicated that he would more explicitly align South Korea with the United States, rejecting Moon’s attempts to balance Seoul’s relationship with Washington and Beijing. Yoon promised to expand South Korea’s role in U.S.-led multilateral initiatives “based on the shared values and principles of freedom, democracy, the market economy, constitutionalism, and human rights.”

Washington will privately welcome greater solidarity with Seoul on foreign and security issues. The Moon presidency was marked by strong policy divergences with the U.S., which Washington sought to publicly minimize rather than risking a rift with an important ally.

However, Yoon will face great resistance to implementing his policies, due to the narrowness of his victory amongst a highly polarized electorate as well as the National Assembly being controlled by the opposition party.

Strong alliances are in the strategic interests of the United States, augmenting the nation’s military, intelligence, and diplomatic capabilities. South Korea is a stalwart ally that has fought alongside U.S. forces in every major conflict since the Korean War. The policies of incoming President Yoon Suk Yeol will remove impediments to closer alliance coordination and will more closely align with comprehensive efforts to address growing regional security challenges.