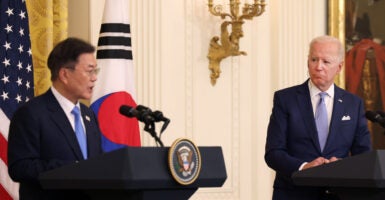 President Joe Biden had a positive meeting with South Korea’s President Moon Jae-in, but issues remain regarding North Korea policy and Seoul’s continued reluctance to criticize Chinese belligerence and intimidation is disappointing. Pictured: Biden and Moon participate in a joint press conference in the East Room of the White House on May 21. (Photo: Anna Moneymaker/Getty Images)

President Joe Biden’s meeting with South Korea’s President Moon Jae-in was highly successful in underscoring the strong bilateral relationship, shared values and objectives, and the importance of South Korea not only to the United States but on the world stage. The lengthy joint statement had something for everybody, reflecting both a compendium of agreements and compromises on security issues.

As expected, the military alliance took pride of place since it marks not only the genesis and sacrifices of the robust relationship but also its continued relevance to address the North Korean threat. The presidents welcomed the successful conclusion of the Special Measures Agreement, which solved a major source of bilateral tension during the Trump administration.

The presidential reiteration of both countries’ commitment to a conditions-based transition of wartime operational control of South Korean forces may end Moon’s quest for doing so in the last year of his term. Washington had rebuffed Moon’s attempt to prematurely implement the bilateral plan prior to Seoul having fulfilled all of the agreed upon conditions.

Unexpectedly, Washington acquiesced to Seoul’s request for eliminating all range and payload restrictions on South Korea’s missiles. The development may have been a quid pro quo for Seoul backing off on operational control transition and now leaves South Korea free to develop missiles with a greater than 800 kilometer range.

Seoul’s objective is unclear since it has yet to articulate a policy or strategy for longer-range missiles and its missiles can already reach all of North Korea. Moon had sought to regain South Korea’s “complete missile sovereignty” and hailed the agreement as enabling Seoul to “better prepare for threats from North Korea and others.”

While China would appear to be the obvious scenario, Seoul has been unwilling to even criticize Chinese transgressions, including incursions into Korea’s air defense identification zone. When faced with Chinese economic retaliation after deployment of the THAAD missile defense system to protect Korean sovereignty, the Moon administration acquiesced to self-imposed restrictions on further improvements to South Korean security.

North Korea figured prominently in the summit. Washington gained Seoul’s affirmation and seeming prioritization of the complete denuclearization of the Korean Peninsula through full implementation of U.N. resolutions. The Moon administration had instead been advocating a relaxation of U.N. and U.S. sanctions and providing large-scale economic benefits prior to Pyongyang complying with U.N. resolutions.

Washington also gained reference to North Korean human rights violations, which Seoul has sought to overlook, though the policy for improving human rights conditions was not specified.

Seoul hailed Washington’s agreement to pursue dialogue and incremental agreements with Pyongyang and suggested that North Korea might now we more willing to reengage with U.S. and South Korean diplomats. However, the Biden administration had previously articulated its policy and that North Korea had rejected requests for dialogue.

South Korea requested including affirmation of the 2018 inter-Korean Panmunjom Declaration and the U.S.-North Korean Singapore Summit Joint Statement as a basis for dialogue with Pyongyang. The former had sought to reduce the potential for inadvertent escalation of military tensions on the Korean Peninsula but failed to curtail North Korean threats or lead to subsequent confidence-building measures. North Korea later declared that it no longer felt bound by the agreement after inter-Korean relations deteriorated.

The Singapore statement is a poor foundation for nuclear negotiations since its denuclearization commitment by North Korea was weaker than previous international agreements, including the 1994 Agreed Framework and 2005 Six Party Talks Joint Statement.

By contrast, South Korea only blandly affirmed opposition to Chinese actions while refusing to mention China by name. The Biden administration had tried to convince Moon to accept stronger language against China but to no avail.

The joint statement included opposition to actions that threaten the rules-based order in the Indo-Pacific region, pledged support for freedom of navigation in the South China Sea, and maintaining peace and stability in the Taiwan Strait. China is the only nation threatening each of those.

Senior South Korean officials sought to both portray the joint statement as a strong step forward while also downplaying its importance.

Blue House officials stressed that it was the first time that Taiwan had been included in a U.S.-South Korean joint statement. Yet, when asked by journalists if Beijing might respond strongly, Foreign Minister Chung Eui-yong stressed that the Taiwan issue was expressed only “in generalities.” First Vice Foreign Minister Choi Jong-kun believed that Beijing would appreciate that the summit did not specify China.

Seoul also sought to straddle the fence by affirming support for “inclusive regional multilateralism including the Quad” (Quadrilateral Security Dialogue) while concurrently refusing to join the organization and complaining of Washington “pressure” to do so.

South Korea is reluctant to join other Asian democracies taking steps to defend freedom in the Indo-Pacific region out of concern of Chinese economic retaliation.

Seoul also pledged to promote “human rights at home and abroad” but did not include any reference to Beijing’s human rights violations and at a time when the Moon administration imposed legislation constraining freedom of expression in South Korea and has used authoritarian tactics against domestic critics.

The Biden-Moon summit affirmed the strong ties between the two countries, including announcements of extensive South Korean business investments in the United States. However, it is clear that significant differences remain on North Korea policy and Seoul’s continued reluctance to criticize Chinese belligerence and intimidation is disappointing.