Royal Wedding Symbolizes Unique Bond Between US and UK 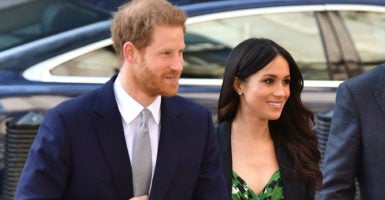 The wedding of Great Britain’s Prince Harry and America’s Meghan Markle this Saturday is a “huge positive” and a symbol of the historic special relationship between the two nations.

So says Nile Gardiner, director of the Margaret Thatcher Center for Freedom at The Heritage Foundation, who agreed to answer The Daily Signal’s questions about the state of the U.S.-U.K. alliance, some details of the royal wedding, and President Donald Trump’s upcoming visit. The transcript that follows was edited for clarity and length.

Ginny Montalbano: How do you see the U.S.-U.K. alliance under the Trump administration so far?

Nile Gardiner: I think overall the current state of the special relationship is very strong. And so the interaction between the British government and the U.S. administration at the moment is very close-knit.

Right now the special relationship is in very good health. You have a U.S. administration that is very pro-British, is very pro-Brexit, that is strong in favor of a U.S.-U.K. free trade agreement, and works incredibly closely with the British government in every area.

Montalbano: Sort of unexpectedly, President Trump has struck up a great dynamic with the French president, Emmanuel Macron. Has that dynamic affected our relationship with the U.K.?

Gardiner: I don’t really think that the recent state visit by the French president makes any difference in terms of the U.S. relationship with Britain. Clearly, Emmanuel Macron has launched a charm offensive in Washington.

I would say that unquestionably today America’s most important ally on the world stage remains Great Britain. When you look at the U.S.-French partnership … there’s a lot of disagreement between the two sides on a wide variety of policy areas.  And I think ideologically Emmanuel Macron and Donald Trump are worlds apart.

So while they have struck a good working relationship,  the worldviews of Macron and Trump are very, very different. There’s more synergy, I think, between the foreign policy of U.S. administration and Great Britain right now than there is between the U.S. and France.

Montalbano: The royal wedding is coming up. Meghan Markle, who is 36, is older than Prince Harry, who is 33. She’s American, biracial, and divorced. What are the implications of this American actress marrying into the royal family?

Gardiner: You have an American marrying into the royal family for the first time certainly since the days of Edward and Mrs. Simpson. This is highly significant, because this will undoubtedly strengthen the bond between the United States and the United Kingdom, the two most important defenders of freedom on the world stage.

I have no doubt that she and Prince Harry will be tremendous representatives for the royal family, not only in Britain but across the world.

Montalbano: There’s obviously an excitement here because Meghan Markle is an American, but is that reciprocated in the U.K.?

Gardiner: Meghan Markle is more of an outsider, marrying into the British royal family as a non-Briton.

Prince Harry has always been someone who sort of carves his own path in the world, and he’s somebody who has been a very independent sort of figure. One of the reasons why Prince Harry is so beloved by the British people is that he is a truly original character. He is an immensely likable person.

He’s also a very determined and single-minded person. And he’s chosen to marry an American, which is highly unusual for the royal family but a reflection of this adventurous spirit that Prince Harry has.

We should also remember that Prince Harry, of course, served with distinction in Afghanistan. He served very closely alongside U.S. forces in Afghanistan. He’s somebody who has a tremendous appreciation for the alliance with the United States, and he’s seen that firsthand, of course, on the battlefield.

So I think that it’s only natural, then, that he has chosen to marry someone from the United States. It’s not a surprise for Prince Harry, really.

Montalbano: Tradition is very important to preserving the monarchy, but the royal family also must change and adapt with the times in order to stay relevant. How do they find that balance, especially with this wedding?

Gardiner: This royal family, of course, without a doubt is the most famous and important and powerful royal family in the world. And a big part of that is maintaining the tremendous traditions that the British royals have maintained for centuries. I think that Meghan Markle will seamlessly adapt to that.

But this is a royal family that has also adapted to the modern era under Queen Elizabeth II, and is in many ways even more popular now than it ever has been. That’s a testament to the fact that the royal family, while being steeped in centuries-old traditions, is able to adapt to the modern world. Meghan Markle’s marriage to Prince Harry is a good example of that.

In large part, I think that’s due to the outstanding leadership of Queen Elizabeth II. The queen has been an absolutely wonderful monarch, greatly loved and revered not just in the United Kingdom but all over the world, including here in America.

Her popularity in the United States has been, according to some polls in the last few years, surpassing that of every single American politician. That’s a testament to the fact that the queen has been an incredible leader. I think that her descendants will follow that tradition, really.

Montalbano: What is the status of a visit from President Trump?

Gardiner: President Trump will be visiting the United Kingdom on July 13. That visit is set in stone. He’ll be meeting with Prime Minister Theresa May, and with the queen as well. It will not be an official state visit, but both the U.S. and British authorities have agreed in principle to a state visit at a later stage. The date is not being set yet.

The president will meet with the queen in the July 13 visit, but it will not be a sort of grand, multiday visit that a state visit would be.

Montalbano: Why is it not going to be an official state visit?

Gardiner: I think this was the result of a common agreement between Downing Street and the White House. So this is more of a working visit, but certainly you will have a state visit at a later stage, which of course requires a great deal of very detailed planning.

Any visit that involves the queen, with multiple events and so on, this takes a very, very long and large amount of planning. So I think more time is needed for that.

But the relationship between the president and the British prime minister is very strong at this time, and they do speak frequently by phone. I think it’s a very robust relationship.

So unlike the last royal wedding with Prince William and Kate Middleton, which was held in the much larger Westminster Abbey, this is a smaller wedding which will be held in St. George’s Chapel in Windsor Castle, which accommodates only about 600 guests.

A decision was made by the royal household that politicians, British and international, would not be invited to the wedding. So the British prime minister is not going to be at the wedding. This is not a political event; this is an event purely for the close friends and family of Prince Harry and Meghan Markle.

Montalbano: Harry has a lot more flexibility now because as William and Kate have had more children, his position in line to the throne keeps getting bumped.

Just in case the readers are wondering why the U.S. president isn’t at the wedding, it’s not some kind of snub or something. This is just the way in which the royal family has decided on the guest list. Not least with a very small venue.