Hamas Hides Behind Smoke and Mirrors to Attack Israel 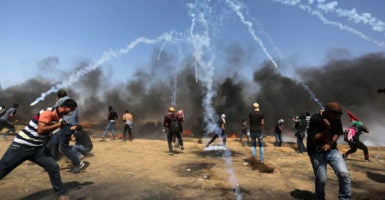 Much of the news media’s coverage of Monday’s opening of the U.S. Embassy in Jerusalem linked the ceremony to Palestinian riots along Gaza’s border with Israel, suggesting that there was a cause-and-effect relationship.

That is a false conclusion. The Gaza border riots were orchestrated by Hamas, the Palestinian Islamist terrorist organization, as part of its “Great March of Return” propaganda campaign against Israel.

The campaign sought to underscore the Palestinians’ self-proclaimed “right of return” by tearing up the border fence, ostensibly to allow Palestinians to “return” to homes that they had abandoned or been forced to leave in the 1948 war that led to the creation of modern Israel.

The riots would have occurred regardless of where the U.S. Embassy was located, because they were aimed at discrediting Israel on the 70th anniversary of its founding.

Hamas, which seized power in Gaza in a bloody 2007 coup, has held almost 2 million Gazans hostage to its uncompromising goal of destroying Israel.

Hamas militants hid among Palestinian civilians to fire rockets at Israeli civilians, provoking three wars with Israel in 2008, 2012, and 2014.

After Israel reduced the rocket threat through targeted strikes and the deployment of missile defenses, Hamas began building tunnels under the border that it used in attacks on Israeli soldiers and civilians.

As part of its “Great March of Return” propaganda offensive that began in March, Hamas has mobilized Palestinian civilians as human shields to hide systematic efforts to dismantle the border fence and stage a mass infiltration of Israel that could threaten thousands of Israeli civilians along the border.

Hamas literally has used smoke and mirrors to disguise its assault on the border, which has included the use of firearms, explosive devices, Molotov cocktails, firebomb kites, and incendiary balloons.

Although apologists for the Hamas riot strategy have leveled one-sided criticism against Israel for the use of excessive force against “protesters,” Hamas has clearly stated its violent intentions.

“This is not peaceful resistance. Has the option [of armed struggle] diminished? No. On the contrary, it is growing and developing. That’s clear,” senior Hamas official Mahmoud Al-Zahhar told Al Jazeera TV on May 13. “So, when we talk about ‘peaceful resistance,’ we are deceiving the public. This is a peaceful resistance bolstered by a military force and by security agencies, and enjoying tremendous popular support.”

On May 16, another senior Hamas official, Salah al-Bardawil, admitted that 50 of the 62 Palestinians killed on May 14, the day the U.S. Embassy was opened, were members of the terrorist group.

Clearly, responsibility for the political violence along the border lies with Hamas. No government in the world would allow a hostile force dedicated to its destruction to cross its border to commit mass murder.

An Israeli-Palestinian peace agreement is impossible as long as Hamas retains its stranglehold on Gaza. Until Hamas is defeated or discredited, it will go on sacrificing the lives and welfare of the Palestinians it has taken as hostages.

For Hamas, Palestinian civilians are useful pawns to manipulate as part of its militant Islamist death march.

It is bad enough that Hamas cynically employs these gruesome tactics to advance its goal of destroying Israel, but it would be even worse if Western media fail to see through the smoke and mirrors deployed by Hamas.

That would enable Hamas to prolong its brutal rule over Gaza and encourage it to continue hiding behind Palestinian civilians to kill Israeli civilians.

Q&A: What Are These Tunnels Hamas Is Using to Attack Israel?

The Escalating Conflict Between Hamas and Israel