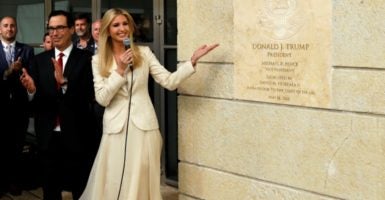 The Heritage Foundation’s Jim Phillips spoke to The Daily Signal’s Daniel Davis and Katrina Trinko for an interview for “The Daily Signal” podcast Monday. Below is a lightly edited transcript of their conversation about the move of the embassy to Jerusalem, and rising tensions in the Middle East.

Daniel Davis: Here to explain this opening of the new embassy and what it means for Israel and the region is Jim Phillips back on the show. He’s a Middle East analyst here at The Heritage Foundation. Jim, thank you for joining us again.

Jim Phillips: Well, thanks for inviting me.

Davis: So, Jim, there’s obviously a lot of implications for this in the region. We’re already seeing a backlash from some neighbors of Israel. But I wanted to ask you first—can you put this in historical perspective for us? Why is this moving of the U.S. Embassy from Tel Aviv to Jerusalem so important for Israel as a nation?

Phillips: Well, I think it corrects a historic injustice in the sense that Israel is the only nation in the world that was barred from declaring where its own capital was. That lead to a historic anomaly where the U.S. had a diplomatic consulate in East Jerusalem for talking to Palestinians but it had no diplomatic facility elsewhere in Jerusalem for talking to Israelis. All of the diplomatic contact came out of the U.S. Embassy in Tel Aviv.

In 1995, the U.S. Congress, by a huge bipartisan majority, approved the Jerusalem Act, which called for moving the U.S. Embassy to Jerusalem by 1999. But there was a waiver within the act, which allowed presidents to postpone moving the embassy if they could cite national security reasons, and every president up until President [Donald] Trump did just that. In part because there was the Oslo peace negotiations early on, and the Clinton and Bush administrations didn’t want to disrupt those.

But in recent years, the Palestinians have refused to engage with the Israelis so I think that’s one thing that led the Trump administration to go ahead and move the embassy. Also, that was one of candidate Trump’s promises that he would do as president.

Katrina Trinko: So obviously Israel is thrilled about this move of the embassy to Jerusalem. At the same time, we’re seeing reports that, I believe, tens of thousands of Palestinians are protesting. It seems like the Middle East is heating up once again, and you in a piece last year noted that this could be an outcome. Does this show that it was maybe a mistake to move the embassy? Do you think it complicated the Middle Eastern situation in ways that we’re going to deal with for years to come?

Phillips: Well, there’s no doubt that it did entail added risk to move the embassy, but I would maintain that much of those risks are from terrorists who would plan to attack the U.S. regardless. They might use the movement of the embassy as a pretext to justify their latest terrorist attack. But to me that was not a reason to hold back.

I was more concerned about the impact on the negotiations, but in recent years, the negotiations have gone nowhere anyway. So that risk was greatly reduced. I think even the most recent Palestinian wave of protest was going to happen anyway because today is the 70th anniversary of Israel’s birth, which Palestinians call … the disaster, and they were going to riot and do demonstrations regardless of what the U.S. decided about the embassy.

Davis: So, Jim, a lot of folks might think it’s just moving the embassy. It’s just symbolic gesture. It doesn’t seem like a threat to neighbors. Can you put this into context for us? Why do Palestinians and some neighbors see this as a threat? Do they see this as one step toward Israelis taking over the whole city of Jerusalem or some kind of moving the ball in a larger context? Can you fill that in for us?

Phillips: Well, Mahmoud Abbas, the leader of the Palestinian Authority, has said that the recognition of Jerusalem and the movement of the embassy discredits the U.S. and made it a pro-Israeli partisan rather than a neutral broker.

But I really don’t buy that argument. I think it shows that the Palestinians are still locked in the zero-some thinking that reveals them to be not really focused on peace, but they see everything that’s a plus to Israel to be a negative for them. As long as that thinking goes on and as long as their efforts to delegitimize Israel by even doubting that Jerusalem should be the capital of Israel, then I think that policy should be resistant.

U.S. officials were careful to say that the movement of the U.S. Embassy in Israel to Jerusalem did not mean that the Palestinians couldn’t eventually have their own capital in Jerusalem, but they choose to interpret this as an either/or situation.

Phillips: I think it has to defend its borders, and I would blame all of this on Hamas, which is organizing these demonstrations. Hamas is considered a terrorist organization not only by the U.S. and Israel but by the [European Union].

Hamas is a revolutionary Islamic extremist organization that not only is opposed to a peace treaty with Israel, [but] is opposed to Israel’s very existence. So as long as Hamas has a strangle hold on Gaza, I have long argued there can be no peace because even if Israel signed a perfect peace treaty with the Palestinian Authority tomorrow, Hamas would be in a position to explode with another round of rocket terrorism.

When Israel pulled out of Gaza in 2005, Hamas staged a military coup against the authority, and turned Gaza into a base for terrorism. So as long as Hamas survives, then there can be no peace.

Davis: Well, you mentioned the rocket terrorism and last week we just saw rocket, uranium-backed rockets launched from Syria at Israel. Is Israel’s confrontation with Iran in any way connected to these developments in Jerusalem? How is Iran responding to the new embassy opening?

Phillips: Well, Iran not only supports Hezbollah and many other Shiite militias that are mobilized and deployed to Syria, but it also finances and arms Hamas and Palestinian Islamic Jihad, two of the terrorist organizations in Gaza that are firing increasingly sophisticated missiles against Israel. Hezbollah has more than 150,000 rockets and missiles in the north, along the Lebanon border, and Hamas has an unknown number inside Gaza that are smuggled through tunnels by smugglers that are being paid by Iran.

So Iran is very much involved in attacking Israel from both directions, and really all three directions, from Lebanon, from Syria, and from Gaza.

Trinko: So last question, it’s a simple one. How do we get to peace in the Middle East?

I think peace can only come when totalitarian, Islamic ideologies are defeated and discredited because as long as Hamas and Hezbollah and Islamic extremists organizations like that rule out any peace with Israel, as long as they are in the driver’s seat, then unfortunately, there’s no chance for peace with more moderate Palestinians.