How to Make Putin Pay a High Price for His Aggression 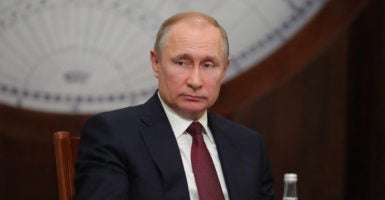 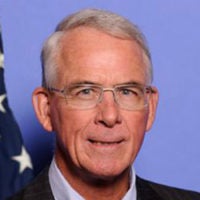 Francis Rooney is the U.S. representative for Florida's 19th congressional district. He serves on the House Foreign Affairs Committee and the House Education and Workforce Committee.

Following a Russian nerve gas attack on British soil, many Western governments have stood in solidarity with the United Kingdom and have expelled Russian diplomats from their countries. And, in the aftermath of a Russian-aided Syrian chemical attack against the Syrian own people, the United States, U.K., and France launched airstrikes against the Assad regime.

These are good first steps in deterring Russia, but on their own they will fail. To impede Russian President Vladimir Putin’s hegemonic activity and obstruct support for rogue regimes like that of Syrian President Bashar al-Assad, the United States and our allies must raise the price he will pay for aggression.

One important option is to apply pressure on the Russian energy sector. Another is to present a credible military deterrent in Russia’s backyard.

Oil and natural gas are the oxygen which fuel Russia’s economy. They account for 36 percent of the entire Russian economy, and Europe is Russia’s largest customer.

In 2016, the Energy Information Administration estimated that over a third of the crude oil and over 70 percent of the natural gas supplied to European member states within the Organization for Economic Cooperation and Development was imported from Russia.

Russia’s natural gas supply to Europe is transported primarily by the Nord Stream pipeline. Since 2011, the pipeline has moved gas from Russia to Germany underneath the Baltic Sea, and has a yearly capacity of 55 billion cubic meters.

So far, the highest yearly flow through Nord Stream has been 51 billion cubic meters, or 93 percent of potential production. Currently, Gazprom, a Russian state-owned enterprise, is planning on building another Nord Stream pipeline through its subsidiary, Nord Stream AG. A second pipeline would provide capacity to double natural gas exports from Russia to Europe.

Since transport by pipeline from Russia has price advantages over liquefied natural gas imported by ship from the Unites States, we can expect Russia to rapidly increase the supply through these pipelines in the future.

Halting construction of the Nord Stream 2 pipeline would cut off part of Putin’s economic lifeline and promote alternative options for Europe to reduce its dependency on Russian natural gas. Since Europe’s dependence on Russia for its energy undermines its ability to contest Russian aggression, stopping Nord Stream 2 aligns with United States strategic interests.

Some nations are willing to confront this reality. The chairman of the Estonian Parliament’s Foreign Affairs Committee recently suggested that the European Union should stop or delay construction of the pipeline to confront and challenge Russia’s geopolitical aggression.

As Denmark and Sweden presently weigh whether to approve construction permits for the pipeline, which would pass through their territorial waters, I hope they will consider the strategic ramifications of the second Nord Stream. This will require diplomatic strength.

Incredibly, one day after announcing expulsion of Russian diplomats in response to the U.K. attack, Germany rolled over to expediency and approved construction of the controversial pipeline.

Chancellor Angela Merkel defended the pipeline as strictly an “economic project.” Two weeks later, however, Merkel had to admit that there are “political considerations” involved with Russia’s pipeline. Time will tell if a policy change follows this shift in tone.

Regrettably, Germany has already approved Russia’s permits to build the pipeline in its territorial waters. Since Merkel’s predecessor, Gerhard Schroder, is the chairman of Nord Stream AG, the question exists of whether undue political influence has been exerted on these decisions.

Our European allies should look to alternatives to Russian natural gas to end the Kremlin’s dominance over European energy. There is a plentiful supply of liquefied natural gas in the United States, Algeria, and Qatar. European access to these markets would weaken Russia’s political leverage over the continent.

The natural gas pipeline which is proposed to run from Norway to Poland, scheduled to be operational in 2022, and a potential second pipeline from the South Caucasus to Turkey, offer competitive alternatives to increase Europe’s independence from Russia. The existing South Caucasus Pipeline is a viable alternative right now.

To further raise the cost of Russian aggression, NATO allies might empower frontline nations like Poland and the Baltics and build out logistical infrastructure there. More operational control might shift from the detached enclave of Brussels to the area most susceptible to Russian aggression.

Disruptive moves like this would be analogous to what President Ronald Reagan and Pope John Paul II accomplished together in Poland, which became the first step in the fall of Soviet communism. It would also mirror Reagan’s success in convincing Saudi Arabia to reduce the price of oil in order to cripple the Soviet economy.

To deter Putin, the United States has already approved the sale of Javelin missiles to Ukraine and the sale of Patriot missiles to Poland. Aegis missiles are now operational in Romania, curing the unfortunate Obama administration error of removing the Polish and Czech missile shield deployed by the Bush administration.

Moving important elements of NATO eastward would be a strong and disruptive move. Working safely within the hash marks will not threaten an overt hegemonist like Putin, but looking outside of the box and upending a few diplomatic routines and architectures might advance the ball.