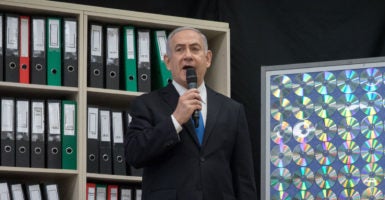 The revelations come weeks before an anticipated decision by the U.S. to “fix or nix” the Iran nuclear deal.

Reactions to the Israeli intelligence revelations ranged from “ding-dong the deal is dead” to “nothing to see here, move along people.” Neither of these extreme assessments accurately characterize the likely impact this intelligence data will have on the final U.S. decision.

Here are five takeaways from the intelligence dump that the Trump administration will no doubt take to heart.

The information is true. It is highly unlikely that Monday’s briefing from Israeli Prime Minister Benjamin Netanyahu is the first the administration has heard about the Israeli intelligence operation. U.S. officials have already confirmed the veracity of the documents. That doesn’t happen so immediately without prior contact.

Sure, the White House knows the Israeli government dumped the information at a strategic time so as to add pressure to the White House to dump the deal. That doesn’t make the intelligence any less true.

The documents don’t necessarily prove that Iran has violated obligations under the Joint Comprehensive Plan of Action (i.e. the Iran nuclear deal) negotiated by the Obama administration. But the documents do conclusively prove the regime lied when it said it had no interest in building a nuclear weapons program, and it shows they clearly have the technical knowledge to pursue a program in the future.

3. The nuclear deal is not enough.

These revelations will only strengthen the administration’s belief that the Iran nuclear deal is inadequate to derail Iran’s nuclear threat.

Reports that suggest the U.S. is trying to amend the deal are accurate. What the administration wants is agreement from Germany, France, and the United Kingdom to add more demands and restrictions to the deal. If those European partners don’t agree, then the U.S. will nix the deal and press on.

Israel’s intelligence and offensive actions in Syria targeting Iranian assets are a reminder of how dangerous Iran has become since the Iran deal was signed.

Iran has sought to build a strategic land bridge to the Israeli border and equip Hezbollah with precision-guided long range missiles, which could overwhelm Israeli missile defenses. There is no question the potential for a larger war is real, unless the Iranian regime is put back in its box and deterred from its destabilizing activities.

There is a simple cause and effect at play in the Middle East. When the U.S. backs off, Iran runs wild. When the U.S. steps up, everyone else gets the backbone to join, and Iran backs down.

The Iranian regime is fragmented. Iran’s economy is in free-fall. Its people are protesting in the streets. Other nations in the region want to the U.S. to step up.

In private, even Germany, France, and the U.K. will admit that President Barack Obama negotiated a weak deal. If the U.S. leads, there is a chance to put things right. If not, things will only get worse.

However the White House acts on the deal, don’t bet there is a serious voice in this administration that doesn’t take these five truths to heart.