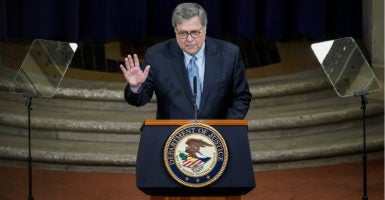 "Government may not impose special restrictions on religious activity that do not also apply to similar nonreligious activity,” Attorney General William Barr says. Pictured: Barr speaks at the National Opioid Summit at the U.S. Department of Justice on March 6, 2020, in Washington, D.C. (Photo: Drew Angerer/Getty Images)

Attorney General William Barr said in a statement Tuesday that “even in times of emergency,” federal law prohibits religious discrimination.

The attorney general released a statement on religious practices and social distancing during the coronavirus pandemic.

It came after Barr intervened in a Mississippi church’s lawsuit against Greenville police, who ticketed congregants during a drive-in service. The ticketing “strongly suggests that the city’s actions target religious conduct,” Barr said, according to Fox News.

While Barr told Americans to follow social distancing directions issued by state and local authorities, he noted that “even in times of emergency, when reasonable and temporary restrictions are placed on rights, the First Amendment and federal statutory law prohibit discrimination against religious institutions and religious believers.”

“Thus, government may not impose special restrictions on religious activity that do not also apply to similar nonreligious activity,” Barr said. “For example, if a government allows movie theaters, restaurants, concert halls, and other comparable places of assembly to remain open and unrestricted, it may not order houses of worship to close, limit their congregation size, or otherwise impede religious gatherings.”

He added: “Religious institutions must not be singled out for special burdens.”

Barr referred to the Statement of Interest that the Department of Justice filed Tuesday in support of the Mississippi church, Temple Baptist Church, saying the city “appears to have thereby singled churches out as the only essential service (as designated by the state of Mississippi) that may not operate despite following all [Centers for Disease Control and Prevention] and state recommendations regarding social distancing.”

Where states have not acted evenhandedly, they must have compelling reason to impose restrictions on places of worship, the attorney general said. They also must ensure that the restrictions are “narrowly tailored to advance its compelling interest.”

“Religion and religious worship continue to be central to the lives of millions of Americans,” Barr said.

He continued: “This is true more so than ever during this difficult time. The pandemic has changed the ways Americans live their lives. Religious communities have rallied to the critical need to protect the community from the spread of this disease by making services available online and in ways that otherwise comply with social distancing guidelines.”

The attorney general concluded by noting that the DOJ will be watching for any state or local government that “singles out, targets, or discriminates against any house of worship for special restrictions.”