What Is Having Coronavirus Like? Here’s One Man’s Experience. 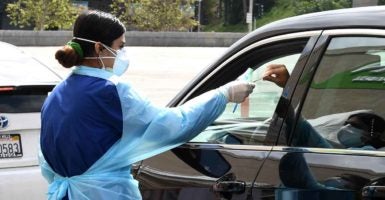 Kevin Weinrich got COVID-19 several weeks ago, likely after he had been traveling in London. He joins The Daily Signal Podcast to talk about his experience with testing and the disease caused by the new coronavirus.

The Daily Signal Podcast is available on Ricochet, Apple Podcasts, Pippa, Google Play, or Stitcher. All of our podcasts can be found at DailySignal.com/podcasts. If you like what you hear, please leave a review. You can also leave us a message at 202-608-6205 or write us at letters@dailysignal.com. Enjoy the show!

Kevin Weinrich: Thanks so much, Rachel. It’s good to be here.

Del Guidice: Well, we appreciate you making the time to talk with us. Can you just start off by telling us about how you knew you had coronavirus and why you think you caught it during your time in London?

Weinrich: Sure. Four of us old friends had gone together to London, two couples traveling from different locations. We met in London, stayed in the same apartment, did all the same touristy things, went to plays and restaurants and museums, that type of thing.

Then we came back on Saturday, March 14 and one [person from] our group then that had come back to a different state, she started having symptoms just about right away. And so she was tested and then eventually her test came through and it was positive.

I started having symptoms about a week after we got back. Our friend’s husband, who was part of that group of four, he came down with symptoms, he was tested, he became positive.

So we, my wife, and I both then were symptomatic. We had our tests and it took a while for our test results to come back, so we didn’t really get our test results back until we were well by that point.

Del Guidice: For someone who hasn’t been tested and who’s heard so much about it, can you explain to us how the testing process went? And then how long it took for you to actually receive those results?

Weinrich: Sure. Because we had been in close contact with someone who had tested positive already, we decided that we needed to be tested, went to our urgent care place here locally, and they did the swab test where they swab the back of your throat and up in your sinuses to see if you have COVID.

Now, because they were prioritizing medical professionals, people who are in the hospital, things like that, our test results didn’t come back for close to two weeks.

We didn’t know if the test results were lost or what. So we eventually went back and they gave us the new test, the 15-minute antibody test. We took that, that came back positive, and then the next day we got our original test results back and they were positive too.

Del Guidice: So you ended up, in theory, sort of having two tests for coronavirus?

Del Guidice: Wow. So what were your symptoms like? Can you walk us through what you and your wife both experienced and just the symptoms that you underwent during the time that you were sickest?

Weinrich: Sure. It seems like everybody’s symptoms are different with this illness. So for me, I started having a fever and just started not feeling good, just generally feeling cruddy and losing some energy. But … I always worked from home. I was still able to work from home, just not up to a full eight-hour day.

Del Guidice: Yeah, that was actually my next question because we’ve heard how aggressive this is for some people—some people really struggling to breathe, obviously, people having to be intubated. So you didn’t experience any sort of shortness of breath? Were you coughing at all? Anything like that?

Weinrich: We had a cough kind of toward the end of it, which we’re here in Georgia in allergy season, so it’s just hard to say what was the cause of that, but it was never the really hard, dry, racking cough that other people had experienced. So we didn’t think that it was a major thing and it turned out not to be.

Like I said, with the breathing, we paid very close attention to that because we knew that those were some of the most troubling symptoms and we didn’t have that.

Our friend who had asthma, she did have more breathing problems, had to be treated some for that, but she didn’t wind up having to go to the hospital either. And now she’s back working.

Del Guidice: Yeah, that was going to be my next question too. So … of your friends that you went to England with, they had the symptoms, some of them did have trouble breathing, but no one was in such straits that they ended up in the hospital or on a ventilator or anything like that?

Weinrich: That’s exactly right. And we were all very careful and paying attention to decide, well, when do we need to go to the hospital if that were to come about? My wife and I never felt that we were very close.

Del Guidice: So looking at this illness from the flu and maybe other illnesses you’ve had, how would you compare this? If you can compare it to other times where you’ve been very sick, how would you rate it?

Weinrich: One day or two days of it was probably not really any worse than a flu that I’ve had before or some high fever, but this just went on and on and on. I’ve never had a sickness this long.

And then, of course, at the end of it, I’ve lost a little bit of strength, a little bit of weight, so I’m trying to build things back up. But I’m feeling great now so I’m very thankful.

Del Guidice: We’re thankful for that too. Taking an outward look at things, what has been your perspective on how President [Donald] Trump has responded to coronavirus?

Weinrich: Of course, I’m no expert on epidemiology or public health, anything like that, I’m just an interested party in this and one with a little bit of a unique perspective. I’m very thankful that he is pushing on getting more testing out there.

I just don’t think we can have too much testing at this point because we need to get a better handle on really how many people actually have this and then when we’re supposedly immune afterward, then can we help to open the economy? Those who have already gone through COVID and are supposed to be immune, supposed to not be able to carry the illness.

Del Guidice: Along those similar lines, you mentioned living in Georgia. What is your perspective on how your state and local leaders have also handled this? Do you think the response has been appropriate? Has it been too robust? Where do you kind of fall on how people locally have handled it?

Weinrich: It’s a mixed bag. Everybody’s coming at this, it’s taken everybody by surprise. There was some concern about the governor having responded a little bit late in this, but I think he was trying to go off the best expertise that was being relayed to him and that expertise is changing, the recommendations are changing.

Now … we’re saying, “Yeah, it’s OK, it’s probably a good idea to wear masks,” and earlier on we were not being told that. So there’s a lot of confusion, but everybody’s dealing with this on a day-to-day basis and changing as we adapt to it.

Del Guidice: Kevin, you mentioned the confusion and I know there are so many people even today still that are very nervous about getting coronavirus. People—because of the quarantine—are isolated. Some of them alone, they haven’t seen people in weeks and weeks.

Weinrich: Well, if you are in good health and you’ve never had breathing problems, things like that, then getting this—it’s hard to say you have better odds from everything that we’re seeing than someone who has a lot of preexisting conditions or someone who’s significantly older.

It is clearly very survivable. You definitely need to pay attention to any symptoms that you get and be in touch with your health care providers.

Del Guidice: As we try and we’re looking at coming on the end of this, I know of the governor of New York, Gov. [Andrew] Cuomo, has said today, on Monday, he mentioned that the worst is over, but there’s still going to be a lot of social distancing measures in place on a lot of states across the country. And I’m curious, what do you think of the social distancing measures, the stay-at-home orders in many states across the U.S.?

Weinrich: It seems like those are going to have to be tailored to how much people congregate. A place like New York city, of course, just like London, it’s a place where it’s very easy to pass along this. And places that are more rural like where we live, or many parts of the country, it just doesn’t seem like it’s going to be as risky to be in small groups of people who have already quarantined for some weeks, but again, I’m no expert.

Del Guidice: Thanks for sharing that. And I did want to leave with one question. If there’s one thing that has frustrated you about the situation, what would that be?

Weinrich: That’s a good question. I guess I would say that we definitely need more testing so that we can all understand the bigger picture better. And I’m not faulting anyone for not ramping this up because it just takes a lot of logistical work to ramp all this up, prioritize it, figure it out.

The antibody test we took had been approved only like a day or two before. And if you get a negative test where it says, “Oh, you don’t have this,” there’s still some risk that you do have it. Now, when we get a positive test, it’s very clear that we had it.

Del Guidice: Well, Kevin, we appreciate you so much for spending some time with us and breaking down what you’ve experienced when it comes to coronavirus. Thank you for making the time and stay healthy and thank you for just being on with us.

Weinrich: Thank you for letting me share my story. I hope it gives some calm to folks.

Del Guidice: Thank you. We appreciate it.