Believers Have Right to Congregate at Easter Despite COVID-19 Crisis 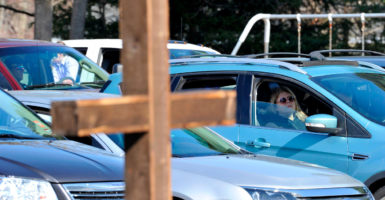 "It is not the role of a court to tell religious believers what is and isn’t important to their religion, so long as their belief in the religious importance is sincere," a federal judge rules. Pictured: Parishioners sit in their cars during a drive-in Easter Sunday service at First Baptist Church in Plaistow, New Hampshire. (Photo: Joseph Prezioso/AFP/Getty Images)

Imagine this: It’s the holiest day of the year for Christians. A crisis rolls through the nation. And as a person of faith, you want nothing more than to responsibly gather with your fellow believers to pray for your nation and to celebrate this holiest of days.

Because as Jesus said in the book of Matthew, “For where two or three are gathered together in my name, there am I in the midst of them.”

Government officials threaten you. They shame you. They encourage your friends, family, and neighbors to “snitch” on you if you plan to celebrate Easter this year. And they assure you that if you do go against their orders and celebrate outside your home, your license plate will be recorded and government officials will be in touch. Fines, isolation, or even imprisonment might await you.

This isn’t the story of someone living in Soviet Russia or some other repressive regime from long ago.

This is the story of parishioners living today—April 2020—in Louisville, Kentucky.

On Fire Christian Center, a church in the area, planned to host drive-in Easter services for congregants and other residents of the community.

Those services would, by all accounts, adhere to all recommended social distancing guidance from both federal and state authorities. Parishioners were to remain in their cars, which would be parked at least 6 feet away from each other, with their windows no more than half open.

The only people outside a car would be the pastor and a videographer, who would also remain a safe distance away from the cars.

Fortunately for these Kentucky parishioners, all Americans enjoy guarantees of their rights that many others around the world do not.

Contrary to what a Mississippi police officer told drive-in parishioners earlier in the week, while other officers in a nearby town issued $500 citations for parishioners attending their own drive-in services with social distancing, Americans’ constitutional rights have not been “suspended” during this time of crisis.

It’s true that First Amendment rights are not absolute, and that, in the immortal words of former Supreme Court Justice Robert Jackson, the Constitution does not require us to enter into a “suicide pact.”

But it’s also true that during times of crisis, individual rights must zealously be protected. We don’t have to look too far back in history to see what happens when they’re not. For instance, many Japanese-Americans were interned solely on the basis of their race during World War II. It was shameful.

The Louisville mayor’s statements in this case are particularly problematic because he singled out houses of worship and religious individuals to prohibit their drive-in gatherings.

That’s categorically different than orders or statements prohibiting large gatherings that generally are applicable, but which may incidentally affect houses of worship because they fall within the broader generally applicable categories, as my Heritage Foundation colleagues Tom Jipping and Elizabeth Slattery have written.

Because the mayor’s orders and statements specifically targeted and singled out religious institutions and individuals, courts carefully scrutinized these statements and orders under the highest standard of review—strict scrutiny.

That means that in order for them to pass constitutional muster, the mayor and city of Louisville must prove that they have a compelling governmental interest and that their restrictions and regulations are narrowly tailored to advance those interests.

On Saturday, the day before Easter, U.S. District Court Judge Justin Walker issued an emergency temporary restraining order preventing the mayor and city of Louisville from enforcing orders against On Fire Christian Center and its planned drive-in Easter gatherings.

Walker found that while the mayor and city had a compelling governmental interest—stopping the spread of COVID-19—their orders to ban drive-in Easter services were not narrowly tailored and were “stunning … [and] ‘beyond all reason,’ unconstitutional.”

On Holy Thursday, an American mayor criminalized the communal celebration of Easter.  That sentence is one that this Court never expected to see outside the pages of a dystopian novel, or perhaps the pages of [the online news-satire site] The Onion.

Walker, whom President Donald Trump recently nominated for a position on the powerful U.S. Court of Appeals for the D.C. Circuit, in a thorough and well-reasoned opinion, went on to say that the proposed prohibitions were both underinclusive and overbroad.

The city’s orders were underinclusive because they didn’t prohibit other, similar activities that government officials have deemed “essential,” including parking in a liquor store’s parking lot or walking into a liquor store to purchase alcohol.

As Walker pointed out, “if beer is ‘essential,’ so is Easter.”

Similarly, the prohibitions were overbroad because the government’s interest in preventing the spread of COVID-19 could certainly be accomplished by allowing parishioners to attend services in their cars.

satisfy their longing for communal celebration … the Free Exercise Clause protects [congregants’] right to worship as their conscious commands them.

It is not the role of a court to tell religious believers what is and isn’t important to their religion, so long as their belief in the religious importance is sincere.

Walker acknowledged that the mayor was obviously trying to save lives:

But when considering the rights guaranteed by the Free Exercise Clause, it doesn’t matter that the government burdening the religious practices of others ‘consists entirely of the pure-hearted, if the law it enacts in fact singles out a religious practice for special burdens.’

Walker got it exactly right.

To be clear, those seeking to practice their faith communally during this time of crisis should do so responsibly and adhere to recommended social distancing guidance. Based on the evidence, that’s exactly what these Kentucky parishioners, and others attending drive-in services, are doing.

As Walker, quoting former Supreme Court Justice Antonin Scalia, noted: “religion is not ‘some purely personal avocation that can be indulged entirely in secret, like pornography, in the privacy of one’s room.’”

As government officials and citizens continue to confront new situations caused by the current crisis, they must do so responsibly and reflectively, continuing to be a bulwark against encroachments—however well-meaning or unintentional—against our constitutional liberties.

If they do so, the sincerely held religious beliefs of all people of faith will be better protected, and our country can emerge from the crisis having reaffirmed its commitment to protecting the constitutional rights of all people—during the good times as well as the bad.