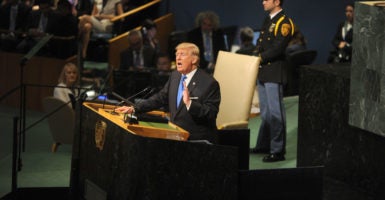 No matter what President Donald Trump does, the Iran deal is likely dead on May 12.

That’s the deadline by which the president must decide whether he will keep the U.S. in the Joint Comprehensive Plan of Action, or Iran deal—a deal that seems more likely to give Iranians a patient path to nuclear weapons than secure any kind of peace long term.

Back in January, Trump said he will seek to secure a better deal with our European allies but that: “This is a last chance. In the absence of such an agreement, the United States will not again waive sanctions in order to stay in the Iran nuclear deal. And if at any time I judge that such an agreement is not within reach, I will withdraw from the deal immediately. No one should doubt my word.”

This statement leaves two choices: either the Europeans fail to come to some sort of agreement with the Trump administration to fix the flaws in the deal, resulting in the U.S. leaving the deal, or the Europeans agree to fix some of the flaws and then the Iranians leave.

Europe and the Iran Deal

Publicly, it seems that the rounds of talks with our European allies have not made much progress.

It does not seem there is an agreement with Europeans to fix the “original sin” of the Iran deal—the so called sunset clauses that allow key restrictions on items like uranium enrichment, centrifuge production, and international monitoring to expire after a certain number of years.

Agreement on addressing some of the other contentious aspects of the deal, namely the inability to curb Iran’s ballistic missile program, and the unconditional opening up of all its military facilities to international inspectors, seem remote.

If the president decides to leave the deal, it’s hardly the end of the world—or even bad. instead, it should be seen as a necessary step to confront one of the deadliest threats Americans, Israelis, and Gulf Arabs face. America’s European allies better be prepared for this.

Ultimately, the Iran deal is a fundamentally flawed agreement that gave Tehran massive sanctions relief up front—while only requiring it to make temporary and easily reversible concessions on its nuclear program.

The deal has failed to live up to the original goal of the international community when talks with Tehran started: to stop Iran from ever getting nuclear weapons. Instead, at best, the current deal only delays it by 10-15 years.

And this is only the case assuming that Iran remains not cheating on the deal behind the scenes—something the international inspectors cannot unequivocally prove under the flawed terms of the deal. Yet nothing since 1979, when the ayatollahs took power during the Islamic revolution, has shown that Iran can be a trusted partner.

Key restrictions on Tehran’s nuclear activities expire after 10 years. Under the deal, Iran is given a green light to operate its covertly built, formerly illicit nuclear facilities and gradually expand its uranium enrichment program to an industrial scale. This legitimized Iran’s past nuclear cheating and paved the way for a patient path to nuclear weapons.

It is difficult to argue that the nuclear deal effectively advances U.S. goals when Iran publicly refuses to allow inspections of its military bases in violation of the terms of the deal, develops ballistic missiles capable of delivering nuclear warheads, and eagerly anticipates the expiration of key restrictions on its uranium enrichment activities.

Contrary to the promises of the Obama administration, the nuclear deal has not moderated Iran’s foreign policy. In fact, since the nuclear deal was sealed in 2015, Tehran has cashed in on the sanctions relief, invested heavily in terrorist proxies, and stepped up its hostile activities in the region. Today we see the evidence of this in Yemen, Syria, and Iraq.

Many Iranians Also Dislike the Deal

Perhaps it is a twist of geopolitical irony that, like many Americans, many Iranians are unhappy with the deal, too. The economic windfall, which many were hoping for, has not trickled down to the average person, a frustration evident during the December/January protests that rocked the country.

Instead of going to average Iranians, the billions of dollars of unfrozen assets and sanctions relief have been used to fund Iran’s military adventures around the region. The international banking sector is still put off by the poor investment environment in Iran.

The truth is the only country that can save the deal is Iran. With fragmented leadership, a tanking economy, and deep unpopularity, maybe Tehran will decide that it is in its own self-interest to pull back on its destabilizing foreign policy and threats to renew nuclear programs and save itself from itself.

In the year 570 AD, the year that the Prophet Muhammad was born, the Sassanian empire, the predecessor of modern-day Iran, had its first foray into Yemen. Today, almost 1,500 years later, Iran is meddling in Yemen again. It is through the lens of this long history that Iran sees its future—and this is something the West fails to understand.

This is why the sunset clauses in the Iran nuclear agreement are so dangerous. This “original sin” of the agreement is based on the hope that Iran’s behavior will change between now and when certain prohibitions expire—but this is an assumption that has no basis in recent history or reality. A breakout period of 15-20 years to achieve a nuclear weapon is merely a blink of an eye for Iran’s leaders.

Trump needs to ask himself one very simple question on May 12: Does the Iran deal stop Iran from getting nuclear weapons forever?

If the answer is no, then he must walk away.