With 2021 Still Young, We Already Have Trouble from Tehran 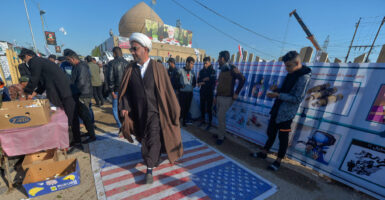 A series of adversarial actions taken by Iran since Jan. 1 show that Tehran has no intention of turning over a new leaf this year. Pictured: An Iraqi cleric walks on a U.S. flag painted on the ground at a Jan. 4 ceremony held in honor of Iranian commanders Abu Mahdi al-Muhandis and Qasem Soleimani, who were killed by a U.S. drone strike last year. (Photo: Ali Najafi/AFP/Getty Images)

Iran wasted no time setting a terrible tone for its 2021 foreign policy this week, making it clear that Tehran remains firmly committed to expanding its nuclear program and defeating U.S. sanctions.

First, its paramilitary Islamic Revolutionary Guard Corps navy seized a South Korean-flagged chemical tanker sailing the Persian Gulf near the Strait of Hormuz, reportedly for maritime pollution violations, according to Tehran. The tanker and crew are being held in Iran.

Iran’s Revolutionary Guards repeatedly have  seized ships  in international waters off Iran’s coast as a means of taking hostages to use as bargaining leverage in disputes with foreign countries or companies.

The pollution charges furnish a convenient pretext for a not-so-veiled attempt to squeeze Seoul to release some of the $7 billion in Iranian assets frozen in South Korea by U.S. sanctions. The fact that the ship hijacking occurred shortly before the upcoming visit to Tehran of South Korea’s deputy foreign minister is no coincidence.

Next, Iran also announced it had started enriching low-enriched uranium to 20 percent concentration of uranium-235, flouting the Obama-era 2015 Joint Comprehensive Plan of Action (commonly known as the Iran nuclear deal), which capped uranium enrichment at 3.67 percent.

This action marks one of the most worrisome escalations of Iranian nuclear defiance since Iran began ignoring key nuclear deal restrictions in 2019, after the U.S. abandoned the flawed deal in 2018.

Iran serially violated the deal’s restrictions on the size of its enriched uranium stockpile, the deployment of advanced centrifuges, the total number of centrifuges in operation, the location of those operations, and previously pushed enrichment to 4.5 percent.

Expanding uranium enrichment to 20 percent concentration of uranium-235 is significant because it greatly reduces Iran’s nuclear breakout time—the period required to enrich enough uranium to fuel one nuclear weapon. The Institute for Science and International Security estimated that by early November Iran’s breakout time had shrunk to as little as 3.5 months.

This breakout time will shrink rapidly in the coming months as Iran enriches to 20 percent, because reaching that enrichment level represents about 90 percent of the work required to enrich uranium to the level required for a bomb.

This effort requires much more time and effort to get to 20 percent from natural uranium (about 0.7 percent concentration of uranium-235) than it does to go from 20 percent to 90 percent (weapons-grade level).

This 20-percent enrichment reportedly started on Monday, taking place at the Fordow Fuel Enrichment Plant, an underground facility located in a mountain on a Revolutionary Guard base near the city of Qom, south of the capital Tehran.

According to a November International Atomic Energy Agency report, Tehran is violating the 2015 nuclear deal in several ways that could be supporting a nuclear weapons program:

Iran also continues to develop its ballistic and cruise missile programs, already the biggest and most active in the Middle East—and possibly eventually capable of carrying nuclear weapons to intercontinental ranges.

Unfortunately, nothing coming from the Iranian regime recently indicates that its bad behavior in international politics has—or will—change anytime soon, even with the turning of the page to a new year.

Iran’s dictatorship stubbornly remains wedded to the same playbook: threats, brinkmanship, hostage-taking, and blackmail.  In response, the U.S. shouldn’t appease this regime, but instead maintain a policy of maximum pressure until Iran changes its behavior.