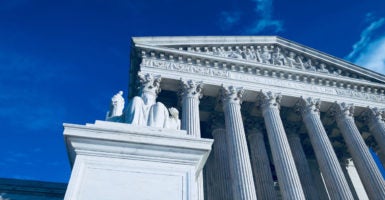 The Supreme Court heard oral argument this week about whether it should overturn Quill Corp. v. North Dakota, a 1992 ruling that forbade states from requiring mail-order retailers to collect a state’s sales tax if they do not have a physical presence within that state, such as a store or employees.

Many states complain that they are losing out on millions of dollars in lost sales tax revenue given the rapid growth of online sales. South Dakota passed a law directly challenging the Quill case by requiring out-of-state retailers to collect sales tax if they sell more than $100,000 of goods or make more than 200 transactions.

That led to the current case against Wayfair, Overstock.com, and Newegg, which all refused to comply with the law.

Isn’t This a Problem Congress Can Solve?

A persistent theme in oral argument was the concern that Congress—not the court—is the proper branch of government to address the “dramatic technological and social changes that ha[ve] taken place in our increasingly interconnected economy,” as Justice Anthony Kennedy described the situation in Direct Marketing Association v. Brohl (2015).

There are two options, let’s say option A is eliminate Quill and states can do whatever they want with respect to retroactive liability and with respect to the minimum number of sales that are required in the state in order for the sales to be taxed, in order to require them to collect the tax. … Option B is a congressional scheme that deals with all of these problems. If those are the only two options, which is preferable?

Jackley responded that the first option is better because “Congress has had 26 years to address this issue. And it’s not Congress, but … it’s this court’s decision, that is striking down our state statutes.”

Justice Elena Kagan responded that Congress “has been aware of” this “very prominent issue” for years and “has chosen not to do something about that.” Doesn’t that make the state’s “bar higher to surmount?”

Jackley replied that since the Quill case involves interpretation of a constitutional provision, the court needs to act. And although “[s]ometimes the activity of this court will spur Congress to act … in this instance, it hasn’t.”

Justice Stephen Breyer apparently didn’t like Jackley’s response, cutting in, “No, no, but the word ‘constitutional’ is not magic. The reason that we say we are more willing to overturn a constitutional case is because Congress can’t act. But, here, they can act.”

The Commerce Clause of the Constitution grants Congress authority to regulate interstate commerce. Justice Antonin Scalia explained in his concurring opinion in the Quill case, “Congress has the final say over regulation of interstate commerce, and it can change the rule … by simply saying so.”

Jackley did not have a response to that question, instead asserting that Quill “set the baseline” and if the court overrules that decision, “states will have their constitutional responsibilities to follow Complete Auto and to follow Pike” (two other Supreme Court decisions relevant to state regulation of out-of-state businesses).

The justices continued asking questions about whether Congress is better suited to address this issue when Malcolm Stewart, deputy solicitor general of the United States, stepped up to the lectern. He argued on behalf of the federal government, which supports the state’s position.

Chief Justice John Roberts wanted to know if, as a constitutional matter, there should be a minimum number of sales before a business is subject to the burdens of a state’s taxing authority. He asked, “Can the states impose the burdens on … any micro-business?”

Stewart explained, “There’s no constitutional minimum … if you have an out-of-state retailer who is deliberately selling a particular physical good within the state … that is a sufficient basis for subjecting that retailer to the tax collection obligation.”

Justice Ruth Bader Ginsburg followed up, “Isn’t that the very kind of question that Congress would be equipped to deal with, establishing a minimum?” Stewart replied, “Certainly, the fact that we don’t think there’s a constitutional minimum doesn’t mean it wouldn’t be a good idea and it wouldn’t hinder Congress’ ability” to enact one.

Kagan asked, “But isn’t that essentially a reason why we should leave this to Congress? In other words, from this court’s perspective, the choice is just binary. It’s … you either have the Quill rule or you don’t. But Congress is capable of crafting compromises and trying to figure out how to balance the wide range of interests involved here.”

>>> Watch as experts discuss the legal and policy implications of this case.

How Will This Affect Small Businesses?

Another issue that came up several times is what impact overturning Quill and its physical presence requirement could have on small businesses.

South Dakota argues that its local brick-and-mortar businesses suffer when out-of-state businesses can sell things to its residents over the internet and avoid the administrative burdens of collecting and remitting sales taxes. But Wayfair points out that these burdens could prevent small businesses from entering the market in the first place.

George Isaacson, who argued on behalf of Wayfair, Overstock, and Newegg, explained:

[O]ver 70 percent of all small businesses have a website. And by the end of 2018, it’s estimated that 91 percent of small businesses will have a website. So the issue here is not between small in-state retailers and out-of-state direct marketers. The real competition is between the large companies, who are omni merchants, who are multi-channel merchants, who are increasingly dominating the internet.

Isaacson replied, “Borders count. States exercise their sovereignty based upon borders, territorial limits. It’s a key part of horizontal federalism in this country.”

Isaacson continued, “If there’s going to be some standard that determines when … a company subject to the tax jurisdiction of a state … the territorial limits of that state make sense.” He also pointed out that “19 of the 20 largest internet retailers already do collect tax because the nature of the market has required them to establish a local presence. Among the 100 top internet retailers, the collection rate is between 86 and 97 percent.”

But for the smaller businesses, the compliance costs can be prohibitively expensive. Isaacson explained, “[T]he cost of just implementation and integration of a software system” to calculate taxes in the nearly 12,000 tax jurisdictions across the country is “up to $250,000.”

Gorsuch shot back, “[B]ut it starts at $12 [per month for 30 transactions] … . So that figure seems a little misleading.”

Isaacson further explained, “The notion of software being a silver bullet … is a real misapprehension. The actual looking up of the rate for the 12,000 different tax jurisdictions hardly scratches the surface. Retailers need to map their products against that software, which is rife with errors because common products are defined differently in different states.”

Toward the end of his time at the lectern, Isaacson put things in perspective, explaining, “Since Quill has been in place, and there’s been a clear explanation of what the standard is for tax jurisdiction, literally thousands of companies have conformed their conduct to the standard that was … established.”

He pointed to Scalia’s concurrence in Quill, which said that “where that kind of reliance is present and companies have ordered their economic affairs in that reliance, that the adoption of stare decisis is at its acme.” Stare decisis is a set of guidelines the court uses to determine whether to uphold a prior ruling.  One guideline is the reliance interests a decision has engendered.

Sotomayor said, “I’m concerned about the many unanswered questions that overturning precedents will create a massive amount of lawsuits about” and the “dislocation … until there is congressional settlement” (assuming Congress does, in fact, take action).

After an hour of argument, a number of the justices appeared to be concerned about the fallout of a decision overruling Quill and the physical presence requirement. The oral argument seemed to raise more questions about whether such a ruling will upset the settled expectations of businesses—large and small—across the country, and whether it would lead to a wave of lawsuits.

Now, the justices will consider how to rule and issue an opinion by the end of June.