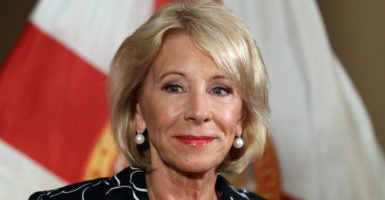 Education Secretary Betsy DeVos’ recent interview with Lesley Stahl on “60 Minutes” caused quite a bit of backlash from critics.

As my colleague Jonathan Butcher has written, “60 Minutes” ignored many of the facts about the state of education in America. Response to the interview drew quite a bit of criticism of DeVos and her policy solutions.

Perhaps one of the most pivotal moments came when she suggested that the United States’ heavy federal investment in education has not yielded any results. Stahl hit back, asserting that school performance has been on the rise.

But the latest government data show otherwise. According to the recently released 2017 National Assessment of Educational Progress, also known as the nation’s “report card,” we now have more evidence that DeVos was correct.

These lackluster results come on the heels of declines on the 2015 assessment, suggesting the beginning of a trend in the wrong direction for academic outcomes.

Indeed, Stahl’s claim that the state of public schools has gotten better simply doesn’t hold up to the data. It fact, DeVos is entirely correct to point out that public school outcomes have not meaningfully improved, and that our nation’s heavy federal intervention in K-12 education has failed to help the problem.

Forty-nine out of 50 states were stagnant on the 2017 report card, and achievement gaps persist. Historically, federal education spending has been appropriated to close gaps, yet this spending—more than $2 trillion in inflation-adjusted spending at the federal level alone since 1965—has utterly failed to achieve that goal.

Increasing federal intervention over the past half-century, and the resulting burden of complying with federal programs, rules, and regulations, have created a parasitic relationship with federal education programs and states, and is straining the time and resources of local schools.

DeVos is correct to suggest school choice as a solution to lackluster school performance. Parents who cannot afford to send their child to a school that is the right fit deserve to have options. As DeVos told Stahl:

Any family that has the economic means and the power to make choices is doing so for their children. Families that don’t have the power, that can’t decide, ‘I’m gonna move from this apartment in downtown whatever to the suburb where I think the school is gonna be better for my child.’ If they don’t have that choice, and they are assigned to that school, they are stuck there. I am fighting for the parents who don’t have those choices. We need all parents to have those choices.

In light of recent evidence from the nation’s report card, “60 Minutes” and other school choice critics should consider that DeVos was correct in her framing of problems facing the nation’s schools and is on the right track with possible solutions—namely, that empowering parents is the right approach to improving American education.