‘60 Minutes’ Snubs the Facts on Education 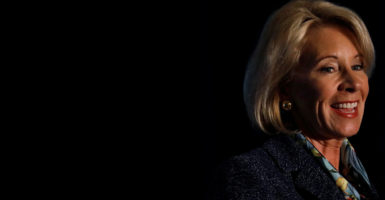 Earlier this week, CBS’ "60 Minutes" grilled Education Secretary Betsy DeVos on why she supports the idea that families should be able to choose where and how their children learn. (Photo: Aaron P. Bernstein/ReutersNewscom)

Beth Richardson is committed to her son’s success. She expected Jed to do his homework once in school, so she did her homework first on the schools near their South Carolina home.

“I visited every single school that was available,” she says. She wasn’t satisfied with Jed’s assigned school, and her research led her to East Point Academy. East Point is a charter school—an independent public school—that provides instruction in both English and Mandarin Chinese.

“They are definitely absorbing the language both verbally and in writing,” Richardson told me in an interview when Jed entered the school in 2013. “I think they are teaching first grade at a second grade level—they are teaching one grade ahead.”

Earlier this week, CBS’ “60 Minutes” grilled Education Secretary Betsy DeVos on why she supports the idea that families like the Richardsons should be able to choose where and how their children learn.

Stahl didn’t provide evidence for these claims, so her line of questioning is worth a closer look.

According to the Nation’s Report Card, a reliable indicator of average student learning state by state, 12th-graders are scoring the same today in reading and math as they did in the 1970s. And while scores for fourth- and eighth-graders have trended upward, the most recent results showed lower scores in math with mixed results in reading.

One data point doesn’t erase a trend, but whatever gains students may be realizing in lower grades appear to be lost by the end of high school.

Test scores aren’t the only way to measure success. One reason we want children to work hard in school is so that they can have more opportunities later in life.

Research on private school options found that students that chose a private school were more likely to finish high school and even enter college than their peers in traditional schools.

Students from low-income families in Washington, D.C., that used a K-12 private school scholarship graduated from high school at higher rates than their peers who didn’t use a scholarship. Similar results can be found in Milwaukee and New York City.

Later in the segment, Stahl says that when some families choose something other than an assigned public school, traditional schools are “left behind” and “can end up with less money.”

But Washington’s budget for the Department of Education sees consistent increases. The Trump administration’s recent efforts to trim spending are notable because budget increases are so familiar.

Regardless, if Stahl is pointing to Washington’s budget, she’s looking in the wrong place. State and local taxpayers account for most—90 percent—of education funding for K-12 schools.

Per student spending around the country also goes only one direction: up.

In 2016, Arizona Gov. Doug Ducey led an effort to add $3.5 billion from state reserves to K-12 schools over 10 years, in addition to regular budget appropriations. Schools in Washington state saw a $4.57 billion increase in the latest budget, a jump of 25 percent, according to experts at the Washington Policy Center.

Nationwide, per student spending has increased nearly 30 percent since 1990 after adjusting for inflation.

Stahl’s comment that education research is “complicated” glosses over increases in taxpayer funding for education, uninspiring-to-mixed results, and examples of remarkable student success when parents have opportunities for their child’s education.

But the significance of average scores and percent funding increases is lost on parents that just want their child to succeed. “The ability to provide this in South Carolina is so wonderful, it is exactly what Jed needs,” Richardson says.

“60 Minutes” should have another look at the facts and then ask why every parent can’t say the same thing as her.