As Trade, Border Security Issues Emerge, Pence to Fill in for Trump at Summit on Central America 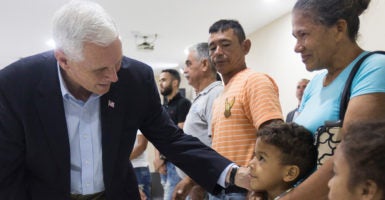 Vice President Mike Pence visits Venezuelan families that have fled the chaos of their country at a church Aug. 14, 2017, in Cartagena, Colombia. Pence is attending the Summit of the Americas in Lima, Peru, this weekend to discuss Latin American issues. (Photo: Myles Cullen/ZUMA Press/Newscom)

Vice President Mike Pence, standing in for President Donald Trump at the Summit of the Americas, has long been highly engaged in Central American issues.

Pence departs Friday for the summit in Lima, Peru. Trump was initially going to attend, but, the White House announced Tuesday, the president opted to stay in the United States to monitor the situation in Syria.

Pence, who has been following matters in Central America since taking office, “looks forward to promoting policy that will lead to an even stronger U.S. economy and working with our close allies in Latin America to collectively hold undemocratic actors in the region accountable for their actions,” Pence deputy chief of staff Jarrod Agen said in a public statement.

On Thursday, Pence had lunch with congressional leaders at the White House regarding the Western Hemisphere in advance of his trip.

Pence has been one of the most outspoken critics in the administration of Venezuelan President Nicolás Maduro’s regime, and met with Venezuelan dissidents last August.

Dictator Maduro again deprives Venezuelans of free and fair elections. Snap elections are undemocratic, unconstitutional, and globally opposed. US will keep up pressure on regime to respect human rights of all Venezuelans, and restore country’s democracy: https://t.co/u8I2dIVcZB

After the trip, Pence will continue to be an administration point man with Latin America, traveling to Brazil in May to represent the United States at a meeting of the Organization of American States.

Last June, Pence was chairman of the Northern Triangle Conference on Prosperity and Security in Central America, where he met with the presidents of Argentina, Chile, Colombia, and Panama.

Pence has also been engaged with the Trump administration’s plans to renegotiate the North American Free Trade Agreement.

In November, the vice president met with U.S. auto executives about NAFTA. In December, he met with Republican governors.

Pence has largely been more pro-free trade than the president. Pence served on the House Foreign Affairs Committee, and was directly involved in trade issues for his state as governor of Indiana.