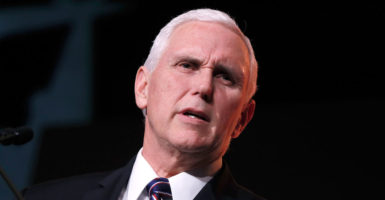 “The Constitution prohibits a religious test for holding public office, so we’ll let the critics roll off our back. But this criticism of Christian education in America should stop,” Vice President Mike Pence says. (Photo: Paul Morigi/Stringer/Getty Images)

Mike Pence made the impassioned defense of Christian education following public outcry over his wife’s announcement she will be teaching art at Immanuel Christian School in Springfield, Virginia.

Critics raged over the fact that the school requires employees to pledge they believe marriage is monogamous and heterosexual and they won’t engage in “homosexual or lesbian sexual activity” or adopt or promote “transgender identity,” in accordance with Christian doctrine.

The school also requires parents of students to sign an agreement that the school can deny admission to or remove a student whose behavior or lifestyle is “in opposition to the biblical lifestyle the school teaches.” Pence characterized the backlash as an attack on the freedom to pursue religious education and lauded the American tradition of Christian schools.

“My wife and I have been in the public eye for quite a while but I have to tell you, to see major news organizations attacking Christian education is deeply offensive,” Pence told EWTN. “We have a rich tradition in America of Christian education and, frankly, religious education broadly defined. We celebrate it. The freedom of religion is enshrined in the Constitution of the United States.”

PREVIEW — @VP @mike_pence responds to critics of @SecondLady's new job. "The criticism of Christian education in America should stop." Tune in tonight for part one of my full interview with the Vice President on @EWTNNewsNightly at 7 PM EST on @EWTN. pic.twitter.com/YKEHyroswC

Several progressive groups—including the NOH8 Campaign, the Human Rights Campaign and The Trevor Project—targeted the second lady and the school over its faith-based policies. The Trevor Project even announced it plans to send 100 copies of a book depicting the Pences’ pet rabbit as homosexual to the school.

“The Constitution prohibits a religious test for holding public office, so we’ll let the critics roll off our back. But this criticism of Christian education in America should stop,” Pence added.