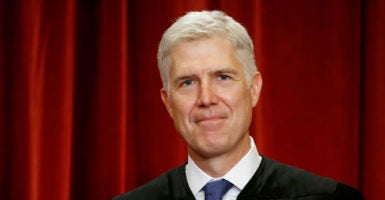 Supreme Court Justice Neil Gorsuch has earned the ire of the left as one of the court's leading conservatives. (Photo: Jonathan Ernst/Reuters/Newscom)

Tuesday marked the one-year anniversary of Neil Gorsuch taking his seat on the Supreme Court.

In his first year, he has proven to be—as Donald Trump promised during his campaign—“very much in the mold” of Justice Antonin Scalia, whom he succeeded on the court.

Gorsuch quickly planted himself squarely in the textualist camp, aligning most closely with fellow conservative Justice Clarence Thomas. Gorsuch’s written opinions (including a handful from the last term and the current term) show a commitment to legal text and careful analysis.

He has shown a keen ability to write accessibly, allowing even the most casual observer to understand the law. His writings also demonstrate his belief that the judiciary is best when it is restrained, and it should refuse invitations to “update” laws rather than interpret them.

In his maiden opinion, Henson v. Santander Consumer USA, Gorsuch wrote that the proper role of the judiciary is to “apply, not amend, the work of the people’s representatives.”

Gorsuch has also expressed concerns about the federal government’s expansion of power and infringement of states’ authority. He dissented in a case dealing with federal courts exercising authority over state law claims, writing that, “The Court today clears away a fence that once marked a basic boundary between federal and state power.”

He noted that “we’ve wandered so far from the idea of a federal government of limited and enumerated powers that we’ve begun to lose sight of what it looked like in the first place.”

Gorsuch is equally concerned about states infringing the rights of individuals, an issue that has been prevalent in several free speech cases this term. During the oral argument in Minnesota Voters Alliance v. Mansky, Gorsuch was skeptical of Minnesota’s position that it could ban voters from wearing T-shirts with “some of the Bill of Rights and not others” when they enter polling places.

At the argument in NIFLA v. Becerra, he pressed California’s lawyer for an explanation of why it’s permissible for California to force private parties to advertise the state’s free abortion services, thereby burdening their free speech.

In the oral argument in Masterpiece Cakeshop v. Colorado Civil Rights Commission, the case of a Christian baker who declined to make custom wedding cakes for same-sex weddings, Gorsuch expressed frustration with the state’s mandate that the baker provide sensitivity training for his staff. Gorsuch asked, “Why isn’t that compelled speech and possibly in violation of his free-exercise rights? Because presumably he has to tell his staff … that his Christian beliefs are discriminatory.”

Gorsuch hasn’t shied away from powerfully dissenting from the court’s refusal to hear important cases. He joined Thomas’ dissent from denial in Peruta v. California, lamenting that the court continued to treat the Second Amendment as a “disfavored right.”

He also joined Thomas’ dissent from denial in Garco Construction v. Speer, a missed opportunity to limit Auer deference—the doctrine that gives great deference to agencies’ interpretations of their own regulations. They called this doctrine “constitutionally suspect” because it transfers “the judge’s exercise of interpretive judgment to the agency,” which is “not properly constituted to exercise the judicial power.”

Gorsuch’s fidelity to the Constitution has made liberal court watchers apoplectic. He has been under a microscope since his name first topped the list of Trump’s potential Supreme Court nominees.

Following his confirmation, this scrutiny has only increased. Seeking to sow seeds of discord, NPR’s Nina Totenberg claimed to have inside information about a growing feud between Gorsuch and Justice Elena Kagan. Thomas dismissed those rumors in an interview last fall.

Liberal commentators, including The New Yorker’s Jeffrey Toobin and others, insolently criticized Gorsuch for asking too many questions during oral arguments, and fault him for frequently citing the Constitution and expressing his interest in getting back to first principles.

Elitist liberal academics pour over his opinions, looking for anything to nitpick, and encouraging people to mock his writing style with the silly hashtag #GorsuchStyle on Twitter.

But taking petty jabs at the justice shows just how little substantive criticism they can muster. In his first year, Gorsuch has shown that he works hard, writes clearly, and cares deeply about getting the law right.

When Gorsuch spoke last fall at the Federalist Society’s National Lawyers Convention, he said to great applause, “Tonight, I can report that a person can be both a publicly committed originalist and textualist and be confirmed to the Supreme Court of the United States. Originalism has regained its place at the table of constitutional interpretation, and textualism in the reading of statutes has triumphed. And neither one is going anywhere on my watch.”

That is something to celebrate.