Supreme Court Hears Ban on Political T-Shirts at the Polls 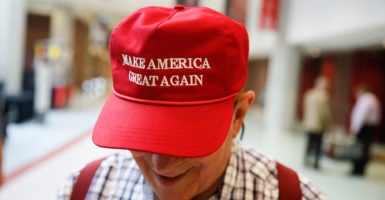 Should apparel with political speech be allowed at the pools? (Photo: Jeremy Hogan/Polaris/Newscom)

When was the last time a T-shirt or button influenced the way you voted?

Probably never—but the state of Minnesota thinks its citizens are much more impressionable, so it banned voters from wearing items that could be construed as “political” at polling places.

In addition to prohibiting express advocacy on behalf of a political candidate or ballot question, Minnesota’s law also bans “issue oriented material designed to influence or impact voting” and “material promoting a group with recognizable political views,” such as a “Don’t Tread on Me” T-shirt.

On Wednesday, the Supreme Court heard oral argument in Minnesota Voters Alliance v. Mansky, a case challenging this ban as an overbroad restriction of protected speech.

Representing the Minnesota Voters Alliance, David Breemer argued that while states have an interest in preventing fraud and intimidation in their elections, polling places are not “pristine retreats from the world” and there’s no right to vote “free from being bothered.”

Chief Justice John Roberts and Justice Anthony Kennedy both expressed concerns about whether the absence of this law would undermine the decorum, solemnity, and dignity of polling places.

Breemer responded to several questions along these lines, pointing out that other laws on the books ensure the state could prevent disorderly conduct, intimidation, and other disruptive acts. He also pointed out that Minnesota is in the minority—only nine other states have similarly restrictive laws, and the states without these laws don’t have problems with intimidation-by-apparel at the polls.

Justice Sonia Sotomayor asked Breemer if someone should be allowed to wear a shirt that says, “Restrain government spending,” and he replied that that would be “too attenuated” from a specific issue on the ballot.

Justice Elena Kagan asked if “Resist” or “Make America Great Again” slogans should be allowed, and Breemer explained that some messages are closer calls, but that Minnesota’s law is clearly overbroad—swallowing far more speech than is necessary.

Breemer explained that “[t]he First Amendment does not end” when voters enter the polls, and noted that the court had never upheld a prohibition on all political speech like this one.

Sotomayor countered that in other cases, there wasn’t a recognized state interest, but in this case, the court in Burson v. Freeman had already recognized the state’s ability to prohibit campaign speech at and around polling places.

Breemer noted that the Burson case dealt with express advocacy, such as handing out campaign materials and soliciting votes on the sidewalk outside polling places. Here, the state was trying to take Burson a step further to prohibit self-expression.

Daniel Rogan, assistant county attorney for Hennepin County, Minnesota, represented the state. When he stepped up to the podium, Justice Samuel Alito jumped in with a list of political symbols and messages, asking which would be allowed at the polls:

Rogan was not able to respond to Alito’s final example (“I miss Bill” or “Reagan/Bush ’84”) because Justice Stephen Breyer cut in, saying that in a situation where a voter believes she was mistakenly told to cover up her T-shirt because it violated the law, the voter could bring a lawsuit.

Rogan explained that if a poll worker determines a voter is wearing something that falls on the wrong side of the “political” line, the voter has the choice of covering it up (or taking it off) or wearing the item and proceeding to vote, but having her information taken down for possible prosecution.

The chief justice remarked that the state’s interest didn’t seem “terribly strong” if it allowed people to enter the polling place while still wearing the offending T-shirt, hat, or other item.

Justice Neil Gorsuch noted that the state has the burden to justify its compelling interest in order to restrict speech in this manner. Rogan replied that the state only needed to show the law was reasonable and that the court recognized in Burson that there is a sufficient interest.

Gorsuch retorted that Minnesota is asking the court to go a step beyond Burson to uphold a law that would prohibit voters from wearing shirts with “some of the Bill of Rights and not others.” Rogan admitted that he was asking the court to expand the scope of Burson, from campaign speech to political speech.

Alito asked if a group of voters decided to make a statement about an issue by all wearing white to the polls, would that be permissible? Rogan responded that white clothes are not a political insignia so they would be permitted.

But this formulaic view ignores the reality that phrases, images, and even colors become associated with political messages. For example, at the Golden Globes, nearly all of the actresses wore black to protest sexual harassment in the entertainment industry; the LGBT community has claimed the rainbow as its symbol; and the Gadsden flag, once a symbol of the American Revolution, is associated today with the Tea Party.

At its core, this case comes down to whether the government can prevent Americans from expressing themselves when they enter the polls on Election Day. The ability to speak your mind and express yourself is a foundational right in American society (indeed at the oral argument, Justice Ruth Bader Ginsburg engaged in self-expression by wearing one of her signature jabots).

The court should recognize that, though Minnesota has good intentions in trying to ensure voters can cast their votes free from intimidation, threats, and other coercion, Americans don’t need the polls to be safe spaces free of any message that might be construed as political.