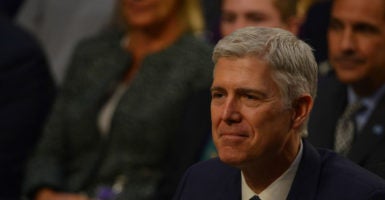 The Senate Judiciary Committee was scheduled to have a committee vote for Gorsuch on March 27, with a full Senate vote on April 3.

Now, the full Senate vote will not take place until April 5.

“Like all their tactics so far, the Senate Democrats cannot actually stop the confirmation vote from occurring, but they are doing their best to make the process as long and as painful as possible,” Rachel Bovard, director of policy services at The Heritage Foundation and a former Senate aide, told The Daily Signal in an email.

“Any member may hold over nominations on the agenda for the first time,” the statement said. “[Gorsuch] will be held over one week.”

Democrats are using committee rules to delay Gorsuch’s vote, meaning that he will not likely see a full Senate vote until April 5, according to Bovard.

“The committee will now vote on April 3,” Bovard wrote. “However, once the nominee is reported out of committee, Senate rules require the nomination to lay over one calendar day, so the full Senate would not be able to take up the nomination until April 5.”

Senate Minority Leader Chuck Schumer, D-N.Y., has promised to obstruct Gorsuch’s confirmation process in any way possible, saying on Thursday that he would vote against the high court nominee.

Judge Gorsuch's nomination will face a cloture vote & as I’ve said, he will have to earn sixty votes for confirmation. My vote will be “No.”

Schumer also asked his Democrat colleagues to filibuster Gorsuch during a speech on the Senate floor.

Even if Democrats decide to filibuster, Gorsuch could still be confirmed with 51 votes if Republicans choose to implement the nuclear option or the two-speech rule, a Senate rule that mandates the Senate stay in the same legislative day until filibustering senators give up on their efforts.

Carrie Severino, chief counsel and policy director of the Judicial Crisis Network, said in a statement released Monday that this delay is an example of Democrat obstruction.

“Senate Democrats perfected the art of obstructing judicial nominees who promise to be independent and base their decisions on the law instead of politics,” Severino said. “Now they are engaging in gridlock yet again, with Judge Gorsuch, despite his exceptional qualifications and broad base of bipartisan support.”