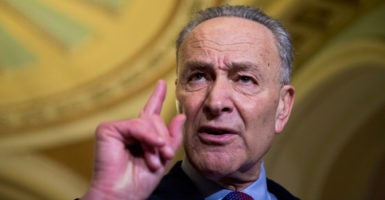 This week, I had the pleasure of being at the White House when President Donald Trump introduced his nominee to be associate justice of the Supreme Court, Judge Neil Gorsuch of the 10th U.S. Circuit Court of Appeals.

It shouldn’t surprise anybody that the president delivered on a promise made during the campaign when he listed 21 people that he would choose from. Everybody knew ahead of time what sort of a judge he would put on the court for this vacancy or any future vacancy.

Gorsuch’s decade of service on the 10th Circuit has earned him a reputation as a brilliant, principled, and mainstream judge. It’s already been widely reported that he was unanimously confirmed by a voice vote to the 10th Circuit. There are still 31 senators in this body who voted for the judge at that particular time. Twelve of them are Democrats, and one of them is Senate Minority Leader Chuck Schumer of New York.

Yet even before we had the nominee, there were some Democrat members who vowed to filibuster the nominee, sight unseen. That’s, of course, unfortunate. But given how Democrats have treated the president’s Cabinet nominees so far, it isn’t exactly surprising.

Gorsuch is universally respected as one of the finest and most fair-minded judges in our country. In fact, one of President Barack Obama’s solicitors general called him “one of the most thoughtful and brilliant judges to have served our nation over the last century.” If that’s not “mainstream,” I don’t know what is.

After the president’s announcement, something interesting happened. Right out of the gate, there were a number of Senate Democrats calling for “a hearing and a vote.” Well, that certainly sounds encouraging. The press picked up on these comments, and one newspaper even reported that after learning who the nominee was, there were already seven Senate Democrats opposed to filibustering him.

At first glance, it appears those Democrats were trying to be consistent with their stance from last year that a nominee deserves a hearing and an up-or-down vote. That’s what those comments would lead you to believe. Even the press was fooled.

But of course, now they conveniently seem to have dropped the “up-or-down” portion of that stance.

Take for example, one of my colleagues who just last year said, “The Constitution says the Senate shall advise and consent, and that means having an up-or-down vote.” But, oddly, just yesterday, that same colleague said, “I support a 60-vote margin for all Supreme Court nominees.”

That’s a nice sleight of hand. But most senators aren’t that gullible.

The Washington Post fact-checker certainly took notice of their wordsmithing. And that has earned them two Pinocchios. When you look at the facts, a 60-vote threshold has never been the “standard” as the Democrat leader said yesterday. Otherwise, we wouldn’t have two of the current justices sitting on the Supreme Court.

My colleagues tried unsuccessfully to filibuster Justice Samuel Alito. The Senate voted 72-25 to invoke cloture. He was then confirmed 58-42 on an “up-or-down” vote. Justice Clarence Thomas was confirmed 52-48. There was no cloture vote on his nomination.

Of course, we all know—Republicans and Democrats—that launching a filibuster against a Supreme Court nominee isn’t part of a “fair process.” It never has been.

But I suppose we should cut our colleagues a little slack. They’re having a hard time figuring out how to make good on their promise to attack the nominee no matter who it is, when they’ve now been presented with a nominee with impeccable credentials and broad, bipartisan support. And this brings me to my second point.

Gorsuch had barely finished speaking at the White House, and there were already attacks on the nominee by some on the left. Some of my colleagues on the other side of the aisle have already taken to the Senate floor to attack and mischaracterize Gorsuch’s record.

Though we expected it, these scurrilous attacks are untoward and misplaced.

After all, those on the left trot out the same tired arguments against every Republican nominee.

They attacked Justice John Paul Stevens because he “revealed an extraordinary lack of sensitivity to the problems women face.” They called Justice Anthony Kennedy a “sexist” who “would be a disaster for women.” And they said there was “ample reason to fear” Justice David Souter.

This morning, The Washington Post editorial board noted that while we argued last year that the president shouldn’t fill a Supreme Court vacancy that occurs during a presidential election year, Senate Republicans “refrained from tarring Mr. [Merrick] Garland personally.”

In contrast, they noted that “trashing Mr. Gorsuch as an outlandish radical, despite his impeccable credentials, the wide respect he commands in his field, his long service as an appeals court judge and the unanimous voice vote he received the last time the Senate considered him for the federal bench, is at the very least premature.” Our friends on the other side of the aisle would do well to take note of this observation.

If the process we’ve witnessed for Trump’s Cabinet nominees is any guide, I’m quite confident we’ll hear all manner of reasons and arguments about why we should delay a hearing for Gorsuch.

But, as my friend and former chairman of the Judiciary Committee, Sen. Patrick Leahy, often notes: Supreme Court nominees don’t have the opportunity to respond to personal attacks outside of their confirmation hearing.

I’m going to consult with Sen. Dianne Feinstein, D-Calif., ranking member on the Judiciary Committee, about the timing for Gorsuch’s hearing. But I can tell you what we aren’t going to do. We’re not going to delay this hearing, especially in the face of all of these attacks on his record and character.

I met with Gorsuch yesterday. He’s as impressive in person as he is on paper.

I expect that as my friends on the other side of the aisle meet Gorsuch and actually review his record, they’ll find him to be an eminently qualified and universally respected judge whose decisions faithfully applying the text of the law place him well within the judicial mainstream.