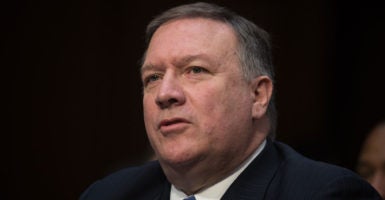 The president’s decision to nominate CIA Director Mike Pompeo as the next secretary of state is wise and timely.

Pompeo grasps the complex nuances of the national security challenges America faces around the globe. As CIA director, he has honed his leadership skills by running one of the most complex organizations in the U.S. government while using that position to restore trust between the CIA and the president.

In addition, he has earned a high degree of confidence and trust from the president. His effectiveness in leading the State Department will in large measure be determined by that level of trust going forward.

Since joining the administration immediately after President Donald Trump’s inauguration, Pompeo has deepened his understanding of the myriad national security challenges and opportunities facing the United States and its friends and allies.

As director, he has managed intelligence collection, analysis, covert action, and counterintelligence and led a diverse set of liaison relationships with foreign intelligence services around the globe. His investment of countless hours with the heads of intelligence and security services in dozens of countries has provided him a phenomenal foundation on which to deepen America’s diplomatic ties in foreign capitals.

The past 15 months have prepared Pompeo well for assuming America’s top diplomatic post.

Pompeo’s public service began in 1986 when he graduated first in his class at the United States Military Academy at West Point. He went on to serve as a cavalry officer patrolling the Iron Curtain before the fall of the Berlin Wall in 1989. He also served with the 2nd Squadron, 7th Cavalry in the Army’s 4th Infantry Division.

After leaving active duty, Pompeo graduated from Harvard Law School, where he was an editor of the Harvard Law Review.

Years later and with a decade of experience and business skills honed in the private sector, Pompeo would go on to serve as a four-term member of Congress representing Kansas’ 4th Congressional District. His time in Congress gave him a clear understanding of how the executive and legislative branches should work together to establish and implement more effective foreign policy.

We have a good idea of how Pompeo will lead the Department of State by looking at his track record at the CIA.

Pompeo is likely to lead the men and women of the State Department’s Foreign Service and Civil Service with an eye toward enhancing their effectiveness in solving difficult problems. He will undoubtedly focus on the people who are serving and will strive to maximize their well-being, while ensuring the department is well prepared to confront threats to our nation’s safety and security.

Pompeo has shown he has the expertise and foresight to supply sound foreign policy options to the president. Last year, for instance, he delivered a high-confidence assessment to the president that the Syrian regime had used chemical weapons against its people. That assessment paved the way for the president’s unequivocal response in launching missile strikes against Syrian President Bashar al-Assad’s infrastructure.

Pompeo is also intimately aware of cutting-edge U.S. intelligence practices. In a recent speech, he described the CIA’s creative new methods that enabled the United States to interdict certain shipments into North Korea that had violated sanctions agreements.

During his tenure, the CIA worked with other agencies and U.S. allies to target ISIS leadership and reduce ISIS territorial holdings in Syria, Iraq, and elsewhere. As a glimpse into how Pompeo thinks and how he might focus State Department priorities and resources as secretary of state, he established mission centers focused specifically on North Korea and Iran to counter the threats both countries pose to the United States, our allies, and regional and global stability.

Moreover, he has provided critical intelligence on China and worked with European partners to combat Russian threats to election integrity in both the United States and across Europe.

Pompeo enjoys the support of top-ranking Republicans in Congress. Senate Majority Leader Mitch McConnell, R-Ky., has pointedly observed that “[t]he president has called upon a brilliant, tough-minded leader to guide our diplomatic corps through challenging days ahead.” House Speaker Paul Ryan, R-Wis., has described Pompeo as “razor-sharp, a dedicated patriot … [who] possesses the type of experience that makes him an outstanding choice to be our next top diplomat.”

Our country will be well served with Pompeo as secretary of state during such a time as this. We trust he will receive an expeditious and bipartisan confirmation process so that he can get on with the business of building America’s core diplomatic capabilities and implementing a sound foreign policy vision.