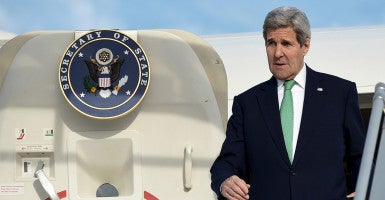 Secretary of State John Kerry has been asked by religious leaders to include Christians in any findings released on the status of genocide in the Middle East. (Photo: POOL/REUTERS/Newscom)

A silent persecution of Christians tantamount to genocide is ongoing in the Middle East, according to experts in Washington.

Last week, at a panel organized by The Heritage Foundation to discuss modern Christian martyrs, academic, religious, and media leaders discussed the persecution—as well as the inattention being paid to the issue by developed nations including the United States.

According to recent estimates, the Christian population in Iraq has dropped to roughly 260,000, down from 1.5 million a decade ago.

The shift likely reflects continuing forced expulsions of Christians from northern Iraq and Syria, as well as abductions and murders by extremist leaders who, earlier this year, declared the coexistence of Muslims with Jews and Christians impossible according to the Quran.

“Forcing a population to leave [its homeland] is one of the five tests, and they don’t all need to be met, but it’s one of the tests for genocide,” said Patrick E. Kelly, executive director of the St. John Paul II National Shrine and a member of the Knights of Columbus. Kelly was referring to the five tenets of qualifying characteristics that constitute Article II of the 1948 United Nations Genocide Convention definition of genocide.

“I think we have a tendency to think governments always know what’s going on on the ground,” Kelly continued. “They don’t always have the best information. But churches often do, because of the grassroots, with-the-people nature of parishes and ministries. If governments say they don’t have the evidence, they can do more to get the evidence, but they should be listening to the faith communities as well.”

As of this week, according to sources, the State Department does not plan to include Christians in a statement to be released on the status of victims of ISIS-inflicted genocide in the region. The statement will include Yazidis, the Kurdish religious minority.

Washington experts stress that any statement or widespread response must be inclusive of all religions.

“The church and all Christians must be working for the religious freedom of all people, because that freedom is rooted in the dignity of the human person,” Timothy Samuel Shah, associate director of the Religious Freedom Project at Georgetown University’s Berkley Center for Religion, Peace, and World Affairs, said at The Heritage Foundation panel.

On Monday, the Knights of Columbus announced they had written a letter to Secretary of State John Kerry urging the inclusion of Christians in any sort of State Department finding on Middle Eastern genocide.

“We write as American citizens concerned about the vulnerable Christian and Yazidi minorities of Iraq and Syria who are being targeted for eradication in their ancient homelands solely because of their religious beliefs,” the letter begins.

The letter goes on to request a meeting with a “small delegation” to debrief Kerry on the crises confronting Christians including forcible conversion, mass murder, enslavement, rape, destruction of churches, and theft of lands and wealth, adding that Pope Francis has himself used the word “genocide” to describe the aforementioned persecution.