Meet the Republican Who Broke the Glass Ceiling for All Women 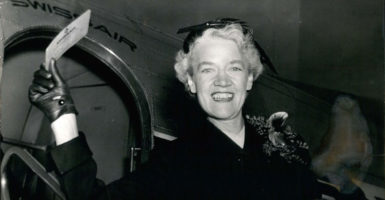 She was the first woman candidate from a major political party to run for president. She regularly faced the mockery and scorn that comes from serving in a male-dominated profession.

At the pinnacle of her career, she found herself confronting a man who many Americans considered crude, obnoxious, divisive, and bigoted.

As you read the paragraph above, who came to mind?

It might come as a surprise to some that the person I am describing was a Republican who ran for president 54 years ago. Her name was Margaret Chase Smith.

Many Americans dream of the day when a woman will be elected to the White House. Few, however, know much about those who have already tried.

These women include Victoria Woodhull, who in 1872 became the first woman candidate for president. While Woodhull broke the barrier, she had no political career to speak of, had radical views outside of the mainstream, and was not nominated by a political party.

It wasn’t until 92 years later that Smith, a senator from Maine, would secure her place as the first viable woman candidate for president in American history.

Smith was born Margaret Chase in 1897 to a family of modest means in Skowhegan, Maine. Her father was a barber and her mother, at different times, was a waitress, a store clerk, and a factory worker.

In high school, Margaret worked part time as a telephone operator. Around this time, she met her future husband Clyde Smith, a prominent local businessman and politician. They were married in 1930.

In 1936, Clyde was elected to the House of Representatives. Margaret, now Margaret Chase Smith, moved with him to Washington, D.C., and worked as his secretary.

Clyde’s health began to decline and she began to take on more of his responsibilities. She met with constituents and gave public speeches on his behalf. In April 1940, Clyde died, but not before endorsing his wife Margaret to replace him.

Smith was not the first woman to serve in Congress—there were already eight women in Congress when she took office. But she began a career that would take her further than her other female colleagues.

Two months into office, Smith faced a competitive primary with four Republican men, but she easily defeated them and sailed to an easy win in the general election. She would go on to be elected to the Senate in 1949 and would serve there for 24 years.

Smith hoped that her career would prove that “ability and proved performance, rather than sex, are the best standards for political selection just as much as they are for any other kind of selection.” When asked if women could serve well in the Senate, she replied:

Women administer the home. They set the rules, enforce them, mete out justice for violations. Thus, like Congress, they legislate; like the executive, they administer; like the courts, they interpret the rules. It is an ideal experience for politics.

Smith enjoyed favorable coverage in the media. Headlines declared “Mrs. Smith Goes to Washington.” The Christian Science Monitor wrote that Smith “was well-established in her own right as a candidate for public office.”

Smith stood out from her female colleagues on policy. While many early female politicians were pacifists, Smith supported a strong defense budget prior to and during World War II, and during the Cold War. Her hawkish views provoked the scorn of Soviet leader Nikita Khrushchev, who called her “the devil in disguise of a woman” who exceeded “all records of savagery.”

Smith hailed from the moderate wing of the Republican Party. At times she aligned with liberals by supporting government housing, child care, and wage equality. Other times, she aligned with conservatives, supporting the Taft-Hartley Act, which curbed the power of unions. Also, she did not embrace the feminism of the ’60s, arguing that the label implied she cared more about women than men.

Smith is most famous for confronting Sen. Joseph McCarthy, R-Wis., during his controversial crusade against communism. While there were indeed communist spies in the United States (including in the government), McCarthy began swinging wildly, even accusing the revered George C. Marshall of treason.

McCarthy’s aggressive tactics intimidated many public figures, especially when fear of communism was prevalent, but Smith was among the first senators to denounce him.

On June 1, 1950, Smith rose up to speak in the Senate chamber to deliver what has been called her “Declaration of Conscience.” She began by affirming that the communist threat to the American homeland was real and that dangerous government secrets had been leaked to the Soviets.

But, with McCarthy sitting rows away, she decried his tactics, including “character assassinations … fear, ignorance, bigotry, and smear.”

It was the speech of her career and was hailed across the nation as an act of political heroism. It also contributed to McCarthy’s ultimate censure by the Senate.

After her declaration on the Senate floor, Gallup polls showed Smith had become one of the most admired women in the world. Elder Statesman Bernard Baruch said that, if a man had delivered the speech, “he would be the next president.”

Indeed, Smith was discussed as a possible presidential or vice presidential candidate, but Dwight D. Eisenhower’s candidacies in 1952 and 1956, and Richard Nixon’s in 1960 froze her out.

As the 1964 presidential election approached, Smith hoped that her time had arrived. Polls were indicating that about 55 percent of Americans could accept a woman president, up from one-third in the 1940s. When President John F. Kennedy, who served with her in the Senate, was asked about her potential candidacy in 1964, he said, “She is a very formidable political figure.”

By then, however, she was 65 years old, a fact that many felt disqualified her. Ironically, some polls indicated that women, more than men, feared that she lacked the stamina for the nation’s highest office in an era of nuclear crises.

The Los Angeles Times wrote, “Mrs. Smith has the qualifications and experience for the presidency no less than many men who have served in the office.” Yet the Times raised concerns, saying that age “tends to be a disqualifying factor … ” and that at Smith’s age, “the female of the species undergoes physical changes and emotional distress of varying severity and duration … known to have an effect on judgment and behavior.”

Undaunted, she ran for the Republican nomination in 1964. Although she did well in the Illinois primary, finishing second, she couldn’t clear 4 percent in any other primary.

Sen. Barry Goldwater of Arizona would go on to win the nomination at the convention in July in San Francisco. But Smith did attend and made history there as the first woman to have her name placed in the nomination for the presidency by a major political party.

In 1972, she was defeated in a re-election bid, in part because of rumors of poor health. Upon retiring from the Senate, she held the all-time voting record with 2,941 consecutive roll-call votes and was the longest-serving woman senator in American history—both of which have now been surpassed.

Still, to this day, she remains the longest-serving Republican woman in Senate history. She died in 1995 at the age of 97.

In a time now when women are encouraged to see the left as their political champion, it is important to remember the contributions of women like Smith who hardly fit into today’s partisan categories.