Biden and the Left Exploit Child’s Tragedy, Ignore Illegal Alien Who Raped Her 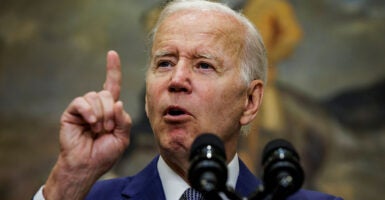 The media used the story of a 10-year-old Ohio rape victim traveling to Indiana for an abortion to push their agenda but neglect the facts that don’t fit—the rapist is an illegal alien. Pictured: After the Supreme Court overturned Roe v. Wade, President Joe Biden lectures about the court taking “away freedoms and our personal autonomy” before signing an executive order expanding access to abortion, July 8, 2022. (Photo: Samuel Corum, AFP/Getty Images)

Hannah Davis is an intern with The Heritage Foundation’s Border Security and Immigration Center and a member of Heritage's Young Leaders Program.

While the story of the 10-year-old Ohio girl who made national headlines for traveling to Indiana for an abortion after being raped remains in the headlines, the media would rather largely ignore the rest of the story—that the illegal alien suspect in her rape, Gerson Fuentes, has been arrested and charged.

Immigration and Customs Enforcement has now placed a detainer on Fuentes as information continues to filter in about how he managed to evade immigration enforcement while working at a cafe and living illegally in Columbus’ Northwest side.

After police had the child identify the suspect in a lineup, Fuentes admitted to raping the young girl multiple times. They obtained a DNA sample from his mouth for testing, and his bond was set at $2 million, as he poses a major flight risk. Currently, he remains at the Franklin County Jail under surveillance.

As sexual abuse coverups are dangerously common, there are concerns surrounding the doctor who provided the abortion and her handling of the situation.

Dr. Caitlin Bernard originally listed Fuentes as 17 rather than 27 years old. If the record had not been corrected, Fuentes would have been charged as a minor instead of an adult.

Bernard has not commented on the incorrectly reported information, nor has she released a statement regarding her clear violation of the Health Insurance Portability and Accountability Act—which requires her to keep patients’ medical information private—when speaking to the press. Furthermore, investigators have yet to conclude if the doctor reported the rape to local law enforcement, which is a requirement under Ohio law.

Unfortunately, an analysis of federal data shows that illegal aliens commit crimes at a much higher rate than lawful immigrants or U.S. citizens. This tragic case is the latest example of what is sadly a common occurrence.

Clearly, the left’s already poor immigration policies have been worsened by the Biden administration’s border crisis. Record-high numbers of illegal aliens are crossing into the U.S. via the southern border every month. Crimes associated with illegal aliens have skyrocketed in America due to President Joe Biden’s open border policies.

Innocent victims like this 10-year-old girl illustrate why it’s critical to protect our border.

In Ohio, unborn children are protected after their heartbeat is detected via ultrasound (roughly at about six weeks). The victim was reportedly six weeks and three days pregnant. The left immediately falsely claimed that the state of Ohio had no exceptions for cases such as this little girl’s, failing to point out that the child would have access to an abortion under a “medical emergency exception,” as the state’s attorney general, Dave Yost, cited.

Regardless of the fact that the 10-year-old never needed to leave her state for the abortion, the left continues to use the fact that she traveled to Indiana as a talking point in their pro-abortion messaging and legislative efforts, including in advancing the “Ensuring Access to Abortion Act.” Biden himself continues touting this message, and the media cheers him on.

Rather than focus on the cause of the child’s rape—the illegal alien that committed a horrific crime—the current administration and pro-abortion activists use this child’s abuse to further their political agenda.

Ironically, the left shouts the false notion that pro-lifers fail to care for children after they leave the womb. Of course, with soaring numbers of unaccompanied children crossing the border and the administration encouraging it more every day with its dangerous policies, we already know administration officials have no problem sacrificing children’s safety to continue fueling their border crisis.

Rather than exploiting a 10-year-old girl’s story to make headlines, the Biden administration should focus on fixing the real problem they caused: the disastrous open border. That is the first step in making sure this tragic story does not happen again.