Concealed Carry on Campus Is More Common, and Useful, Than You Thought 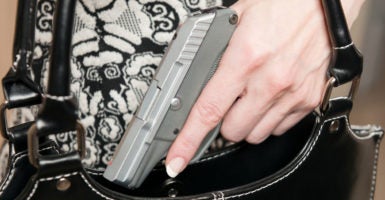 Between 1992 and 2002, 26 women reported fending off a rapist with a concealed gun, according to the Census Bureau. (Photo: 400tmax/Getty Images)

Kyle Becker is a member of the Young Leaders Program at The Heritage Foundation.

Recent tragedies have put a spotlight on the issue of firearms in schools, particularly whether there should be more or fewer armed personnel protecting students in the classroom.

What many do not realize is that students and teachers at some colleges and universities have for years been able to arm themselves on school property.

Which States Allow Guns On Campus, Under What Circumstances

Several states have statutes that explicitly protect the right of licensed individuals to carry concealed firearms at public colleges and universities:

Most colleges and universities in states that protect the right to carry concealed weapons on campus have policies prohibiting firearms from being carried in certain sensitive areas and buildings.

For example, the University of Georgia prohibits the concealed carrying of firearms at athletic events, in Greek or university housing, or within “disciplinary action locations.”

Similarly, the University of Texas at Austin allows faculty members to declare their offices as “gun-free zones,” and students are not permitted to keep their weapons stored in their dorm rooms.

Some Universities Refuse to Cooperate

In several more states, the law on the books is complicated by administrative rules from noncooperative colleges and universities.

In Oregon, for example, the law protects the right of individuals to carry concealed firearms on public college and university campuses, and the state’s Court of Appeals in 2011 struck down an institutional policy prohibiting the possession of firearms on campus.

This has not stopped state universities and colleges from continuing to post guidelines purporting to prohibit the concealed carry of firearms on campus, even as county attorneys publicly state these policies cannot be legally enforced under state law.

The state of the law in Wisconsin is even more uncertain.

In 2011, Gov. Scott Walker signed Wisconsin Act 35, which makes it lawful for persons with concealed carry licenses to be armed in public as long as they do not present themselves with criminal or malicious intent.

The law created exceptions for certain public buildings but did not expressly include college or university buildings among those exceptions.

But the University of Wisconsin system continues to enforce an administrative code that prohibits firearms on campus, despite the wording of Wisconsin Act 35.

Allowing Law-Abiding College Students to Defend Themselves Can Save Lives

After Colorado passed its Concealed Carry Act in 2003, the University of Colorado argued that an obscure legal loophole exempted it from the law because it did not expressly state its requirements applied to the university.

Then-Attorney General Ken Salazar issued a nonbinding opinion agreeing with the university, which subsequently continued to prohibit firearms on campus because, officials argued, they “threaten the tranquility of the educational environment in an intimidating way” and “contribute in an offensive manner to an unacceptable climate of violence.”

In the years following the enactment of the concealed carry law, Colorado State University—which permitted concealed firearms on campus—experienced a 60 percent drop in reported crimes. Meanwhile, the University of Colorado—which continued to prohibit students from defending themselves with firearms until a 2012 Colorado Supreme Court ruling found the prohibition unconstitutional—experienced a 35 percent increase in reported crimes.

In other words, it appears that the University of Colorado created a more threatening and intimidating educational environment by banning firearms than Colorado State University did by allowing students to effectively defend themselves.

This makes sense. The Centers for Disease Control and Prevention found that firearms are much more likely to be used in a defensive manner than they are to be used for criminal activity and are used defensively somewhere between 500,000 and 3 million times per year.

Not only are firearms invaluable for defense of self or others, but concealed carry permit holders as a group are statistically among the most law-abiding citizens in the nation. It is hardly surprising that, according to John Lott of the Crime Prevention Research Center, “Not once has a permit holder in any of these states [that allow college students to carry concealed firearms] committed a crime on one of these campuses with a gun.”

In 2013, legislation was introduced in the Colorado Legislature that would have prohibited the concealed carry of firearms on campus, even for permit holders. Rape survivor Amanda Collins provided powerful testimony before the Senate State Affairs Committee, highlighting how a similar prohibition in Nevada had resulted in her inability to defend herself against her attacker.

She was raped just a few feet away from an emergency call box, in the parking garage of the campus police station, which had closed for the day.

“Had I been carrying concealed, he wouldn’t have known I had my weapon,” Collins told the committee. “I know without a doubt in my mind at some point I would’ve been able to stop my attack by using my firearm.”

She further demanded to know “[h]ow … rendering me defenseless protect[s] you against a violent crime?”

Collins’ rapist went on to rape two more women and murder another before he was stopped—something Collins could have accomplished had the university not disarmed her.

It is highly likely Collins indeed would have been able to effectively defend herself had she been permitted to carry her firearm that night. The Centers for Disease Control and Prevention concluded that “self-defense can be an important crime deterrent,” and that studies evaluating the actual effects of defensive firearm use consistently find “lower injury rates among gun-using crime victims compared with victims who used other self-protective strategies.”

Further, when the Census Bureau interviewed more than 2,000 people who said they had been sexually assaulted between 1992 and 2002, only 26 stated they used a weapon to resist—but not a single one of those 26 cases resulted in complete rapes, because all would-be victims reported that the confrontation ended swiftly after they deployed their firearms.

Her question remains as valid today as it did in 2013: What did anyone gain from disarming her and rendering her defenseless?

The answer remains: nothing.