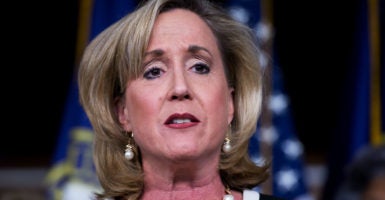 The best way to empower women is through conservative policies such as tax reform, four Republican congresswomen say.

Noting that most women are responsible for household finances and health care decisions, and that female-owned businesses employ more than 8.4 million people, the GOP lawmakers explained their support for tax relief and tax reform at a recent Heritage Foundation event.

The Republican-led Congress enacted the Tax Cuts and Jobs Act signed into law just before Christmas by President Donald Trump.

“We did a tour around the country before tax reform,” said Rep. Cathy McMorris Rodgers, R-Wash., who as chairwoman of the House Republican Conference is the fourth-highest ranking Republican in Congress. “Employers wanted to give workers raises and good health care, but they couldn’t.”

“Now, they’re investing in their employees,” she said.

Overhauling the tax code has allowed small businesses to move from survival mode to “dream” mode, McMorris Rodgers said during the panel discussion at The Heritage Foundation in observance of Women’s History Month.

The bill would allow private-sector employers to offer employees the choice of paid time off in lieu of cash wages for overtime hours worked. That would give working mothers and fathers the opportunity to spend more time with their children.

The Heritage event concluded with each congresswoman leaving the women in the audience with a piece of advice. They all insisted that the nation needs more women in public service.

“We are the doers,” Wagner said. “You want something to get done, you ask a busy woman.”