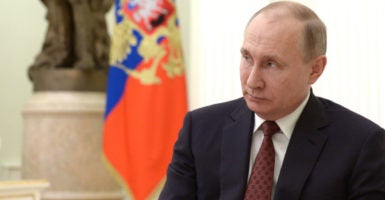 Russia held its presidential election on Sunday, with President Vladimir Putin emerging the clear victor. He is now slated to begin a new, six-year term that will take him well into his third decade as head of state.

The Daily Signal sat down with Alexis Mrachek of The Heritage Foundation to discuss Sunday’s election and what it means for Russia and the United States.

Russian President Vladimir Putin won the Russian election, securing a fourth term in office. How exactly did it go down?

As all expected, Putin scored another election victory on Sunday and will soon enter his fourth term in office. That is excluding the two terms he served as prime minister, which would actually bring the tally to six terms of leading the Russian Federation.

Putin is essentially a dictator. He runs the country as though he had an inherent right to it, as though it had always been his. That is not true. He has been in power since 1999, though, which is a substantial amount of time.

From what you’ve mentioned so far, it doesn’t seem like the Russian election was a true election. Why was that not the case?

People in Russia can also bribe election officials. Bribery is a large part of Russian culture that reaches to the heart of the Kremlin and affects elections. It’s a broken system.

Putin did not even participate in any of the public debates with other candidates. In abstaining, he showed the obvious—that he already knew he would win and didn’t need to stoop to the lowly level of other candidates.

Another note to mention: Putin has never participated in election debates in his 19 years of power.

What types of issues motivated the Russian people to vote for Putin? Domestic, international, or both?

It was indeed both types of issues—domestic and international. Many Russians think that Putin has improved the economic situation in Russia, when it’s actually been the contrary. This misinformed belief in part drew them to the polls for Putin.

But the international side of things was also quite significant. The Russian election took place on the fourth anniversary of Russia illegally annexing Crimea. The population of Russia generally has a nationalist and imperialist mindset toward Crimea. Over a century ago, Crimea belonged to Russia, and the Russian people seem to think that it still belongs to Russia. But without a doubt, it now belongs to Ukraine as part of the agreement signed with Russia when the Soviet Union dissolved.

What do these election results mean for Russia on the whole? What should we expect to see from Russia in the coming years?

As for the Russian people, the situation looks pretty grim. It does not look like things will improve for them, as long as Putin is in power. Putin and his cronies will probably keep taking money from citizens’ paychecks, for example, and use it to fund their more-than-lavish lifestyles.

Alexis Mrachek is a research assistant for Russia and Eurasia at The Heritage Foundation.