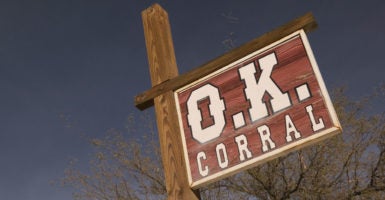 A frequent criticism levied at those who oppose widespread gun control is that they want to return to a kind of Wild West of violence and criminality.

But now, ironically, more and more people on the left are pointing to the Old West as a model for gun control. They say that conservatives are wrong to think the Second Amendment right to bear arms is ingrained in American history.

A recent article in Smithsonian Magazine called “Gun Control Is as Old as the Old West” laid out the case that some famous western towns, like Tombstone and Dodge City, actually had gun control laws.

But injecting these laws into the modern gun debate would seem to be ill-advised, especially if they are used to argue that “disarmed” societies are necessarily safer.

Most of the gun control laws in the Old West, if they existed at all, had nothing to do with confiscation or restrictions on gun type. They had more to do with gun use—for instance, firing pistols in city streets.

Few opponents of gun control today would object to limitations on discharging firearms in a busy intersection.

There were some frontier towns where there were gun restrictions, such as in Tombstone, Arizona, where an 1881 law made it “unlawful to carry in the hand or upon the person or otherwise any deadly weapon within the limits of said city of Tombstone, without first obtaining a permit in writing.”

Laws of this extent were mostly unheard of in most American cities and were unusual in the Old West. But even in this limited case, they proved ineffective.

Perhaps the most famous gunfight in all of American history took place at the O.K. Corral between Tombstone authorities (including the Earp brothers and Doc Holliday) and associates of Ike Clanton, a rough-around-the-edges frontier character.

As an article for NRA-ILA explains, “Tombstone of the 1880s is a peculiar model for those who today agitate for greater local authority to restrict or ban firearms.”

The notorious incident at the O.K. Corral took place in the closest equivalent to a “gun-free zone” in the 19th century. The gun control measure, such that it was, did little to stem gun violence, and likely provoked the infamous confrontation.

At a trial that took place after the shooting, a judge declared that Sheriff Virgil Earp “committed an injudicious and censurable act” to gather a posse to take down Clanton and take away his guns, and that he had “acted incautiously and without due circumspection.”

“The [gun] ordinance, in this case at least, proved to be almost entirely ineffective,” the NRA piece said. “As recounted in the court decision, Sheriff Behan had ‘demanded of the Clantons and McLaurys that they give up their arms, and … they ‘demurred,’ as he said, and did not do it.”

Even the Smithsonian piece noted that Tombstone’s “most violent year was 1881, in which also only five people were killed; three were the cowboys shot by Earp’s men at the O.K. Corral.”

Mass violence, like what took place at the O.K. Corral, was actually infrequent. Moreover, the Old West reputation for lawlessness is unwarranted, despite, at times, an elevated number of homicides.

Crime such as rape and robberies occurred at a much lower rate than in modern America—certainly lower than in the 1970s and 1980s, when the nation was wracked by a surge in criminality.

It is also worth noting that crime and gun violence has fallen steeply since the 1990s, even as gun ownership has increased dramatically.

The crimes that did take place in the West were often violent confrontations between young men who were drunk or who got in a personal confrontation; it goes without saying that societies of mostly young men tend to be a little more violent than others. Hence the restrictions on gun usage that took place in some frontier communities.

For instance, historian Robert McGrath, who wrote a book about crime in the most notorious Old West towns, found that “robbery, theft, and burglary occurred infrequently,” and that “bank robbery, rape, racial violence, and serious juvenile crime seem not to have occurred at all.”

“While the homicide rate was high,” McGrath wrote, “the killings were almost always the result of fights between willing combatants.”

The few gun control-type laws that existed were poorly and inconsistently enforced, McGrath said in an interview with the Chicago Tribune.

Additionally, McGrath concluded that it was widespread gun ownership that deterred criminality in these areas in which law enforcement had little authority or ability to handle crime.

McGrath wrote that an “obvious factor” in discouraging burglary in the California frontier town of Bodie “was the armed homeowner or armed merchant.”

“No fewer [than] a half-dozen burglaries in Bodie were thwarted by the presence of armed citizens,” he wrote.

An even more dramatic instance of widespread gun ownership thwarting crime took place in Minnesota in 1876.

The Jesse James gang attempted to rob a bank in Northfield, but as the robbery was taking place, one merchant shouted, “Get your guns, boys—they’re robbing the bank!”

Armed citizens swarmed the crooks to protect their community and local business. They wore no uniforms and had no official mandate to step into the line of fire. But they acted bravely and unhesitantly in a time of crisis against highly organized criminals—a sharp contrast to what took place during the Parkland, Florida, school shooting, in which armed, trained members of law enforcement didn’t rush in to stop the shooter.

Northfield’s armed citizens killed a couple of the bank robbers and wounded many more. This effort by the good guys with guns helped put an end to the James gang and its string of crimes.

It is among many, many examples of how gun rights were not just valuable, but essential to public safety in the Old West.

The Second Amendment and Citizenship

What’s unquestionable is the fact that gun ownership was nearly universal on the frontier and seen as a vital element for both individual, and importantly, community protection. It wasn’t enough to merely rely on the authorities.

The Founders created the Second Amendment with the intent of protecting the individual right to self-defense, but also for the purpose of protecting the responsibility of citizens to protect their neighbors, communities, and country.

As Jay Cost wrote for National Review, the Second Amendment was not simply “a selfish right to bear weapons for oneself, but a public-spirited right to ensure that citizens could defend the polity without recourse to omnipotent, unaccountable armed forces.”

This community responsibility to bear arms played an essential role in the Old West, but it is still in large part understood by the most law-abiding gun owners today.

They fear that gun control measures billed as “common sense” will lead to restrictions on their God-given rights and will make them defenseless in situations of danger.

Far from an example of successful gun control, the Old West is a perfect demonstration of why gun culture is so pervasive in America, and how widespread firearm ownership does not in itself lead to crime and violence.

Crime, including school shootings, is certainly still a problem in modern America, but it’s time we stop laying the blame on guns and gun culture and look for other ways of solving these problems.

It is no mere cliché to say that often the only way to stem evil in a fallen world is to empower free men with the right to bear arms, so they may foster the values of citizenship, self-reliance, and community responsibility essential in a land of liberty.