‘Black Panther’ Points Us All Toward Common Ground 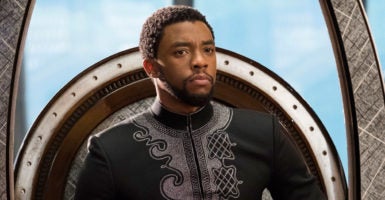 Marvel-Disney's "Black Panther" is the 20th-highest grossing film of all time as of Feb. 28, taking in a total of $421.8 million in North America. (Photo: Marvel Studios/Walt Disney Pictures/Album/Newscom)

After months of hype, “Black Panther” finally hit the big screen, and on so many levels, that’s a good thing.

From a filmmaking standpoint, as well as a philosophical one, director Ryan Coogler’s foray into the Marvel Cinematic Universe is aesthetically pleasing and also thought-provoking.

However, its release was not without controversy.

While there were many eye roll-inducing hot takes on many sides, perhaps most bizarre was how quickly some on the right jumped to criticize the “political correctness” of those who (rightly) pointed out the film’s landmark achievements in the arena of race, such as the film’s minority-majority cast, and a primary protagonist and antagonist both played by outstanding, young African-American actors.

According to these critics, there have been comic-book or superhero films featuring African-American leads, like the “Blade” franchise, and Will Smith’s “Hancock.” Why, then, celebrate “Black Panther” as some unique accomplishment? Is this not identity politics run amok?

Yes, the consistent politicizing of our everyday lives makes more divisive even those things that should draw us together. Watching Chadwick Boseman’s T’Challa obliterate SUVs in a high-speed chase in downtown Busan, or the sheer spectacle of bad guys deploying iron-clad battle rhinos in a climactic third act should be enjoyable apart from any political considerations.

But that does not mean conservatives should not be excited about the fact that this movie has been incorporated into the broader, multibillion-dollar Marvel project—a key aspect that separates it from the aforementioned films—as well as the opportunities it gives all of us for establishing common ground.

Films are not a panacea, and this one is no different. It will not magically solve the problems of interracial tension springing from issues of law enforcement, economic policy, and the like.

But is it absurd to hope that maybe, just maybe, it will be a small step in helping establish common ground for people from a diverse range of backgrounds?

Should that not be the end goal of diversity, after all—building common ground, and shared experiences, even if the paths we take to arrive there are different?

More to the point, is that not the arc of the heroes in this story? In the film’s first act, T’Challa and CIA operative Everett Ross, played exceptionally by the inimitable Martin Freeman, display, at best, a strong skepticism for each other, doubting one another’s intentions and working at cross-purposes.

By the end of the film, we see both of these characters, Ross in particular, having reached a point of being willing to sacrifice themselves on behalf of the very people they doubted earlier in the story.

T’Challa, in particular, struggles with this question. Should he embrace the outside world and assume the risks it entails, or continue to safeguard his people by hiding Wakanda’s true nature?

“Black Panther” delivers the spectacle we have come to expect from Marvel Studios, but it also presents us with morally complex and layered characters—something Marvel is not especially proficient at doing, particularly for its villains—who offer some important insights not just into the future of the Marvel Universe, but also, more importantly, for ourselves as a society.

For this reviewer, “Black Panther” has not assumed the throne of Marvel film rankings. The original “Iron Man,” “The Avengers” and “Captain America: The Winter Soldier,” all outpace it for one reason or another, and it has serious competition from “Captain America: Civil War” and “Thor: Ragnarok.”

However, “Black Panther” is still an outstanding addition to the Marvel Cinematic Universe, and presents us with important questions in a way unique among Marvel films to this point—questions that hopefully will lead to more important conversations down the road.