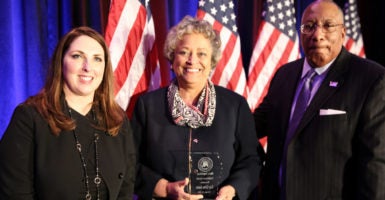 “None of us gets where we are on our own or by ourselves,” says @KayColesJames.

“I can think of at least five or six different people that I would like to share this award with. None of us gets where we are on our own or by ourselves,” James said upon accepting her award, recognizing her husband Charles for his support.

James became Heritage’s president in January. She was previously the director of the Office of Personnel Management in the administration of President George W. Bush, where she oversaw the entire 1.8 million employees in the federal civil service workforce.

She also designed the process for about 170,000 employees from 22 separate federal agencies that merged into the new Department of Homeland Security, created in response to the 9/11 terrorist attacks.

During the administration of President George H.W. Bush, James was associate director of the White House Office of National Drug Control Policy, and later the assistant secretary for public affairs at the Department of Health and Human Services.

At the state level, James was secretary of the Virginia Department of Health and Human Resources under Virginia Gov. George Allen in the mid-1990s.

James also served as dean of the Robertson School of Government at Regent University from 1996 to 1999, and founded the Gloucester Institute, an organization that trains college-age leaders in the African-American community.

Haynes also held positions in both Bush administrations and now serves in the Trump administration as a senior adviser to Education Secretary Betsy DeVos.

“I thought of my grandmother and father when I was told this award was forthcoming,” Haynes said. “My grandmother was a lifelong Republican, and on her deathbed, I visited with her and said, ‘Grandma, why are you a Republican?’ And she said, ‘It was the party of Abraham Lincoln.’ My father said the same.”

President George H.W. Bush named Haynes as the first black U.S. assistant secretary of postsecondary education and director of academic programs for the U.S. Information Agency. After serving in the Bush administration, he was named acting president of Grambling State University.