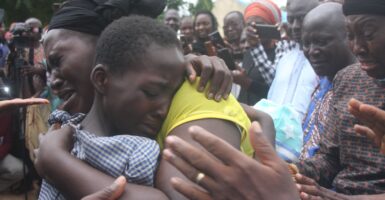 A mother hugs her daughter on July 25 after the girl was released, along with other 27 students from Bethel Baptist High School, in northern Nigeria. Gunmen seized 121 students at the school on July 5. (Photo: AFP/Getty Images)

While much of the world has been focused on combating the global coronavirus pandemic, extremist and criminal groups have been carrying out kidnapping-for-ransom raids on Nigerian schools with the hopes of extorting local populations.

The Daily Signal has reported on those developments previously, but the situation has not improved. In early July, following six days of attacks, Nigerian authorities closed 13 schools after more than 125 students were kidnapped from a Baptist high school.

In addition to the kidnappings, 33 civilians were killed and four churches were burned.

According to StatiSense, a Nigerian data company, more than 3,000 people have been kidnapped since January.

Instances like those seem to be occurring with increasing frequency in Nigeria and other parts of West Africa.

A U.N. report released last year called the terrorist situation in West Africa “extremely volatile.” In April, Gen. Stephen Townsend, commander of U.S. forces in Africa, noted, “Despite all of our best efforts, this terrorism continues to spread.”

In July, the U.N. Security Council reported that terrorist activity in Mali, Chad, Burkina Faso, Niger, Ivory Coast, and Nigeria is reaching troubling levels. According to the report, at least 132 people were killed by assailants in Burkina Faso, and an attack in Niger killed more than 130 civilians in its western Tahoua region.

Such widespread violence is devasting for the populations that live there. Not only are many of their lives in danger due to terrorist violence, but any sort of meaningful economic development is extraordinarily difficult to attain when people live under constant threat of violence.

Unfortunately, according to The Heritage Foundation’s 2021 Index of Economic Freedom, many of those countries struggle with corruption and lack the robust institutions necessary to protect their people.

Significant progress has not been made to combat the violent extremists, and as attacks continue, increasing numbers of people living in those regions are having their homes destroyed and loved ones killed.

The combination of widespread terrorist violence and ineffective government has kept the people living in West Africa from enjoying the benefits of economic freedom.

When economic freedom improves, so does the environment, educational attainment, food security, and health outcomes.

It’s a tragedy that those people have suffered for so long, and until the situation improves, they are likely to continue struggling.

Governments in the region are not powerless to address those problems. It’s long past time for them to muster the political will to act.