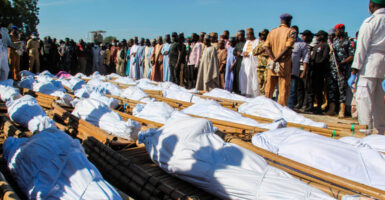 The perpetrators of the slaughter in Nigeria are Islamist terrorists from Boko Haram, also known as the Islamic State in West Africa. Pictured: Mourners attend a mass funeral Sunday in Zabarmari, Nigeria, for 43 farm workers whose throats were slit the day before, authorities said, by Boko Haram fighters in rice fields near the village of Koshobe. (Photo: Audu Marte/AFP/Getty Images)

Horrific massacres of Christians in the northern and middle parts of Nigeria at the hands of Muslim militants and terrorists have been a daily occurrence in recent years.

Nigeria, a nation of close to 200 million, is made up about evenly of Christians and Muslims. Christians live predominantly in the South; Muslims are the majority in the North.

Over 11,500 Christians have been murdered in Nigeria since June 2015, Genocide Watch reported in April.

The perpetrators of the killings are Islamist terrorists from Boko Haram (also known as the Islamic State in West Africa), who seek to create a state like the so-called caliphate that took hold in parts of Iraq and Syria between 2014 and 2015.

Increasingly, the attackers have included another group, militant nomadic Fulani herdsmen who raid villages and kill Christian men, women, children, and babies with AK-47s and machetes.

The Fulani are a massive tribe that stretches across many African countries. The vast majority of the tribe’s members aren’t guilty of mass murder and shouldn’t be lumped in with the militant segment that is committing the atrocities.

Some in the government of Nigeria, which notoriously lacks the rule of law, have been complicit in the attacks. Data on cellphones inadvertently left behind by the killers identified owners of the phones as government insiders.

Police are also complicit, according to reports. Some police stations haven’t responded to brutal anti-Christian violence even when loud gunfire and screams are clearly audible from less than a mile away.

Such inaction by police is common when victims aren’t Christians. The terrorists also have benefited from millions of dollars in ransom payments, leading Nigeria to be called the kidnapping capital of Africa.

Nigeria should protect the rule of law by using its military to confront and crush the perpetrators.

As the entry on Nigeria in The Heritage Foundation’s 2020 Index of Economic Freedom shows, the country is among the worst in the world in supporting the rule of law. The most heinous forms of cruelty and brutality go unopposed. Terror reigns in Christian villages.

A new book titled “The Next Jihad: Stop the Christian Genocide in Africa” documents atrocities and warns that all-out genocide could happen if Nigeria’s government and the world’s media organizations don’t stop turning a blind eye to what is going on.

The authors, both Americans, journeyed to the scene of attacks from January through March in which more than 400 Christians lost their lives. The authors interviewed many survivors whose lives have been ruined, reporting:

[T]he Fulani raiders arriv[ed] under cover of darkness with their jihadist chants and their AK-47s. The marauders swiftly maimed and murdered Christians while burning down every structure and pillaging what remained.

Hundreds of similar incidents have occurred. We reviewed one confidential list that precisely documents attacks by Fulani militants on seventy-nine Christian villages over the last five years in one state alone. Yet we haven’t identified a single case where the perpetrators were brought to justice or where security forces prevented an attack.

“The Next Jihad” goes on to describe courageous acts by some Muslims who risked their lives to save Christian neighbors during attacks by the militant Islamists.

>>> Related: Pastor and Rabbi Work to End Persecution of Christians in Africa

Tragically, denial of the atrocities is rampant. Some media organizations ludicrously have blamed global warming for the attacks on Christian villages by militant nomads. Nigerian government officials have claimed that COVID-19 would stop the militant Fulani from attacking villages.

In the aftermath of the terrible genocide in Rwanda in the 1990s, President Bill Clinton told an audience there:

All over the world there were people like me sitting in offices, day after day after day, who did not fully appreciate the depth and the speed with which you were being engulfed by this unimaginable terror. … Never again must we be shy in the face of the evidence.

Those words seem prophetically apt, given the situation in Nigeria today.