Now More Than Ever, What Nigeria Needs Is Economic Freedom 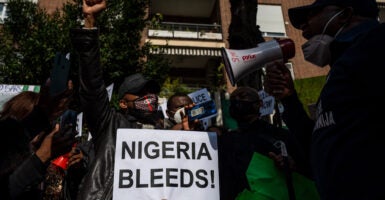 What began as peaceful demonstrations against extrajudicial killings, police brutality, extortion, and torture committed by Nigeria’s Special Anti-Robbery Squad have become more violent in the days following the killing of at least 10 demonstrators on Oct. 20 at a place called Lekki Toll Gate in Lagos, Nigeria.

That night, police fired live ammunition into the crowd randomly, less than 30 minutes after turning off the streetlights.

Since those killings in the dark streets of Lekki Toll Gate, there has been vandalism and rioting, and many more people have been killed.

Before that escalation, however, the protests also had another dimension; namely, the desire of Nigerians for more economic opportunity and economic freedom.

No surprise there. Nigeria scored low on The Heritage Foundation’s 2020 Index of Economic Freedom. The index ranks 180 countries, averaging scores in 12 categories of economic freedom. The scores are calculated using statistics from third-party international organizations.

Overall, Nigeria ranks 116th out of 180 countries, and its status is “Mostly Unfree.” Nigeria does especially poorly on the Rule of Law variables, where its scores are among the worst in the index.

Countries whose people enjoy a high level of economic freedom typically do not devolve into the widespread violence and political unrest like that which is currently enveloping Nigeria.

People who are economically free are motivated to improve their own lives and the lives of their families by participating in financially rewarding work and in business opportunities open to them.

In mostly unfree countries like Nigeria, however, bribes, corruption, and nepotism are rampant, so entrepreneurs and laborers who do things straight, who don’t have money to pay bribes, and who lack family connections in the government sometimes determine that working hard doesn’t pay.

The corruption inherent in the system poisons the business environment, causing opportunities for entrepreneurial advancement never to appear.

A research data set funded by the World Bank called the Worldwide Governance Indicators measures the political stability and politically motivated violence and terrorism in the same countries ranked in the Index of Economic Freedom.

The chart below confirms that it’s not just Nigeria where a lack of economic freedom correlates with widespread political unrest. The pattern is well established around the world.

Revolutions are often fought to bring the promise of new freedom for a country’s people. The reason so many of them fail to achieve that goal is—as the British rock ’n’ rollers The Who sang—what they actually bring is a “new boss, same as the old boss.”

They bring the rule of a different strongman, king, or dictator, rather than ushering in a predictable, robust, and fair rule of law.

After the use of live ammunition escalated the situation in Lagos, Secretary of State Mike Pompeo issued the following statement:

The United States strongly condemns incidents of military forces firing on unarmed [protesters] in Lagos. Those involved should be held to account under the law.

Unfortunately, given Nigeria’s dreadful lack of progress in reforming its judicial and legal systems, it’s anyone’s guess whether that will happen.