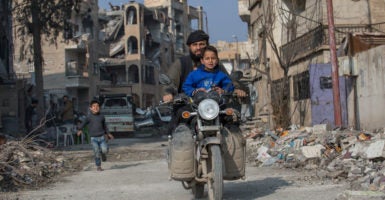 A photo from this year of Raqqa, Syria, formerly a city controlled by the Islamic State. In Iraq and Syria, the fight against ISIS is far from over. (Photo: Sebastian Backhaus/NurPhoto/Sipa/Newscom)

Luc Sasseville is a member of the Young Leaders Program at The Heritage Foundation.

Federal prosecutors allege that the 45-year-old mother of two hacked social media accounts in order to recruit on behalf of ISIS. Furthermore, Dais is said to have provided instructions on how to make explosives and suggested potential targets for attacks, such as street festivals, summer celebrations, and churches.

The arrest underscores the continuing threat posed by ISIS. Although it has been dealt a string of setbacks in Iraq and Syria, it continues to attract supporters drawn to its Islamist extremist ideology, which it disseminates on a wide array of social media platforms.

It would be a huge mistake to complacently underestimate the threat posed by the Islamic State, which continues to expand in Afghanistan, Bangladesh, Egypt, Indonesia, Pakistan, the Philippines, and Yemen. Even in Iraq and Syria, the fight against ISIS is far from over.

In eastern Syria, ISIS still controls territory near Hajin, a town on the Euphrates River, and in Dashisha, an area close to the Syria-Iraq border. Within these pockets exist several hundred battle-hardened militants who are far from giving up the fight.

ISIS remains a tough and resilient foe that quickly adapts to battlefield conditions. It has returned to its roots as an underground terrorist network, employing insurgent tactics, including assassinations, bombings, and ambushes.

This shift in tactics—and the temporary diversion earlier this year of Kurdish elements of the Syrian Democratic Forces militia, which the U.S. has partnered with against ISIS, to fight the Turkish intervention in Afrin in northwestern Syria—has allowed ISIS to continue to fester in Syria’s east.

The return of ISIS to guerrilla warfare comes as part of an attempt to reorganize and regain bits of lost territory. According to U.S. Army Col. Ryan Dillon, the spokesman for Operation Inherent Resolve, the anti-ISIS coalition military campaign, ISIS is far from being permanently defeated in Iraq and Syria.

In regards to Iraq, ISIS has suffered major battlefield defeats and has gone underground to regroup. Iraqi Security Forces are far from complacent, however, as ISIS still remains a threat in western and northern Iraq.

As for Syria, despite its territorial losses, ISIS has concentrated on conducting raids and ambushes on pro-regime forces west of the Euphrates. The group also has launched offensives to reclaim territory elsewhere, including several areas south of Damascus.

Its retreat into remote rural and desert areas—along with its underground networks in urban centers—indicates that the group will likely maintain a presence in the region, raising the potential for a future resurgence, as it did in Iraq after the withdrawal of U.S. military forces.

ISIS also has demonstrated the ability to cultivate and maintain a global following, despite sustaining significant territorial losses.

The U.S. must adopt a strategy in Iraq and Syria that advances America’s strategic interest of defeating ISIS while avoiding a costly and risky mission creep toward the overly ambitious goal of nation-building.

With respect to Syria, the U.S. must tailor its military presence toward counterterrorism with the chief goal of preventing ISIS or another jihadist group from re-emerging. Furthermore, the U.S. should press its regional Arab allies to shoulder more of the burden when it comes to stabilizing eastern Syria with troops, humanitarian aid, and economic assistance.

As for Iraq, the U.S. must act as a counterweight to Iran and help stabilize the shaky government in Baghdad, as well as continue to aid in the reformation and improvement of the Iraqi Security Forces.

It is imperative that the United States do all it can to prevent ISIS from resurging, as it has done before. A failure to do so will only mean more death and destruction in Iraq, Syria, and elsewhere in the world.

Where the Fight Against ISIS Stands, and How the US Can Win

U.S. Must Plan Now for the Day Mosul Is Liberated

The Growing Threat of ISIS Unleashing a Weapon of Mass Destruction