Economic Freedom Is the Key Ingredient in Enhancing Food Security 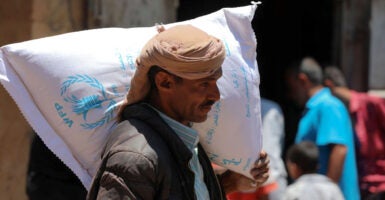 The Norwegian Nobel Committee recently awarded the Nobel Peace Prize for 2020 to the World Food Program, the world’s largest humanitarian organization, for its work combating hunger and enhancing food security.

The award is timely, as enhanced efforts to advance food security are critically needed in response to the COVID-19 slowdown in world economic growth.

The American can take particular pride in the award. The U.S. is by far the largest single donor to the World Food Program, contributing close to $3.4 billion in 2019. That’s almost four times the amount contributed by Germany, the second-largest donor, and over 100 times the contribution from China.

The organization has long been headed by an American, and is currently led by former South Carolina Gov. David Beasley.

The United States has been providing food assistance around the world for over six decades. It has done so to assist suffering populations, but also to support foreign policy interests in bolstering stability in fragile states and various crises and to support agricultural development and related projects in developing nations.

At the heart of these tasks—as many less developed countries are learning to their benefit—is the advancement of economic freedom, so that a virtuous cycle of growth and development can meaningfully occur for the greatest number of people.

In fact, advancing economic freedom should be at the forefront of any serious efforts to enhance food security more effectively.

Economic freedom, cultivated by the rule of law, limited government, regulatory efficiency, and open markets, is critical to generating the broader-based economic dynamism that creates opportunities for growth and advancement.

The positive relationship between economic freedom and enhancing economic development has been demonstrated empirically in the annual Index of Economic Freedom by The Heritage Foundation, and in many other similar studies by multilateral development organizations such as the World Bank and the African Development Bank.

As researchers at the International Food Policy Research Institute have also pointed out, “International trade has proven to be a critical mechanism for growth and development—helping to build stronger value chains, mitigating conflict, and providing access to higher quality and quantities of goods and services.”

There may be no magic formula to guarantee the improvement of food security. However, the focal point of tackling hunger and ensuring greater food security around the world should be the advancement of economic freedom—the indispensable ingredient in promoting growth and lasting development.

As we congratulate the World Food Program for the 2020 Nobel Peace Prize, let’s also remember that food security rests on policies and practices that advance economic freedom.