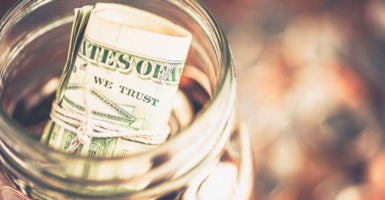 A report by the National Bureau of Economic Research shows that cutting government spending is a better way of reducing the debt than raising taxes. (Photo: CatLane/Getty Images)

Some point to the deficit as a reason to raise taxes. But new research shows that spending cuts are superior to tax hikes when it comes to reducing the deficit.

Following on the Tax Cuts and Jobs Act and the massive discretionary spending increase authorized in the Bipartisan Budget Act of 2018, it is even more critical now that lawmakers invoke a powerful budget tool this year—reconciliation—to reduce the growth in entitlement spending.

Typically, when governments try to reduce their deficits, they will either raise taxes or cut government spending. A new working paper published by the National Bureau of Economic Research looked at these two approaches and compiled the results of several studies.

The report demonstrates that raising taxes is not an effective way to address growing federal expenditures. Instead, it highlights the positive economic effects of actually cutting government spending.

To measure each approach, the authors studied fiscal plans that were based on spending cuts in comparison to plans that were structured on higher taxes. Their findings show that limiting government spending has historically correlated with fiscal success across the globe.

For instance, back in the 1980s, countries like Austria, Ireland, Belgium, and Denmark all accomplished deficit reduction and higher gross domestic product after implementing spending cuts. The same can be said for both Spain and Canada in the 1990s.

Even after the global economic crisis of 2008, the countries that tried to boost federal revenue by increasing taxes were caught in much deeper recessions than countries who instead cut their expenditures.

Another indicator considered by the authors is business confidence. Unlike tax increases, spending cuts directly enhance the confidence business owners and investors have in the economy. When the government is focused on supporting a strong private sector rather than pilfering the pockets of American businesses through ever-increasing taxes, business can thrive and the economy can grow.

The studies highlighted in the report strongly emphasize that when the government raises taxes, businesses are less likely to take financial risks, whether that be through investments or job creation. This is because companies will not only have to spend more on taxes, but higher taxes also diminish the returns on investment, thereby reducing incentives for risk-taking.

The authors of the paper also reviewed research making the case for tax increases over cutting expenditures. They identified that those studies were missing critical data by failing to use multiyear models to arrive at their conclusions.

Studies that generate their data based on only one year show that an increase in taxes can achieve higher rates of deficit reduction with greater revenue than with spending cuts. This is because tax cuts might be able to “shock” the economy with an immediate revenue increase but long-term studies show that cutting spending will lead to much higher rates of deficit reductions over time.

The authors conclude that finding solutions to lasting economic growth should be the goal. Assessing a fiscal consolidation’s plan success should not be based on short-sighted year by year analysis that fails to look at the big picture.

The Bipartisan Budget Act of 2018 doubled down on growing spending by authorizing the single-largest spending increase since the Great Recession. Congress needs to get serious with the fiscal year 2019 budget resolution to significantly reduce entitlement spending—the key driver of deficits and debt—lest the nation be crippled by skyrocketing annual deficits and the gains from tax reform be far too soon undone.