Facebook Suspended Me for Sharing My Religious Beliefs About Homosexuality 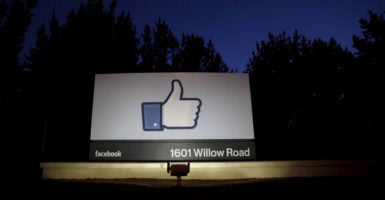 Michelle Rioux is a lawyer (newly minted and not currently practicing) and lifelong Catholic.

Editor’s note: After The Daily Signal contacted Facebook for a response to this op-ed prior to publication, the company notified author Michelle Rioux as follows: “A member of our team accidentally removed something you posted on Facebook. This was a mistake, and we sincerely apologize for this error. We’ve since restored the content, and you should now be able to see it.” Rioux previously had not received an answer from Facebook to her questions about the suspension.

The next day, Facebook deleted one of them and barred me from posting, sharing, commenting, reacting, and sending friendship requests. The subject of my posts had been the third section of the Catholic Church’s Pastoral Care of Homosexual Persons, which reaffirms the teaching that homosexuality is an “objective disorder.” A few of my classmates from Catholic college and I had engaged in an intense but civil back-and-forth on the subject, and after doing the social media equivalent of a handshake, I posted what I took to be the most crucial language from Section 3 of the Church document.

Thus, I had two Facebook “memories” from the same day (Feb. 7, 2014) quoting the same language directly from the Catholic Church’s document (the whole of Section 3 or just a part of it). The first post had no commentary from me at all, and I prefaced the second post with only two words to explain why I was posting: “For emphasis.” Initially, I was furious. I read over the language suspending me and thought, “I literally just quoted the Catholic Church.” The arbitrariness of the decision together with the complete lack of an appeals process, or even a reasonably responsive complaint department, left me glaring at my phone in outrage.

I have now walked back my indignation since that first moment of realizing I would be unable to heart all my little nephew’s photos for three days. I recognize the suspension as the first-world problem that it really is. But I do think we ought to call Facebook’s action by its proper name: censorship.

If Facebook were honest about its determination to exclude certain viewpoints—mine, for example—then at least I would be on notice that I was risking suspension of my account by posting the Catholic Church’s words on homosexuality.

Instead, Facebook promotes itself as a neutral platform for diverse views and, reserving to itself the final power to judge what constitutes an “attack,” it censors without acknowledging that fact.

My twin posts sat quietly on Facebook’s servers for four years without incident, and Facebook itself called both posts to my attention four years later. I neither composed this language recently nor dug through my feed to find it.

Maybe there’s a method to Facebook’s madness that excuses it from my complaint about arbitrary decision-making. But there is no doubt whatsoever that this action constitutes censorship.