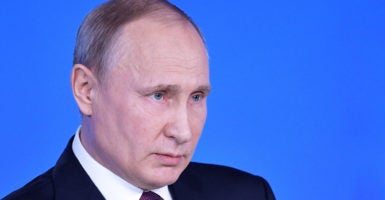 In addition, 4,334 social media accounts connected to a Russian agency that manipulates media platforms spread across Twitter, Facebook, and Instagram, the report from the committee’s majority staff says.

In September, Smith sent letters requesting information from Facebook and Twitter. The committee chairman was building on a previous investigation into allegations of surreptitious Russian government funding of U.S. environmental organizations such as the Natural Resources Defense Council, the Sierra Club Foundation, and the League of Conservation Voters Education Fund to spread propaganda against drilling techniques used to extract natural gas.

Smith followed up with letters to Twitter and Facebook the next month, supplying more information about his committee’s findings and thanking them for being responsive.

These same social media companies were able to link Russian accounts with the Internet Research Agency, based in Saint Petersburg, Russia.

“Despite the tag-team efforts of Russian trolls and ‘keep it in the ground’ activists, the reality is American energy dominance is here to stay,” Nick Loris, an economist who specializes in energy issues as a research fellow at The Heritage Foundation, said in an email.  “For six straight years, the U.S. has been the largest producer of petroleum and natural gas hydrocarbons.”

It includes a dark, ominous photo and reads, verbatim: “We’re about to celebrate thanksgiving and tell schoolchildren we made peace w Native Americans while DAPL protestors are being tear gassed.” DAPL apparently stands for Dakota Access Pipeline.

At the same time, the Russian posts “focused on the counternarrative and sought to exploit anti-activist sentiment by propagating content supportive of pipeline construction efforts, illustrating once again the Kremlin’s indiscriminate efforts to cause discord and disruption,” the report says.

U.S. energy exports to European countries are increasing, which means they will have less reason to rely upon Russia for their energy needs. This, in turn, will reduce Russia’s influence on Europe to Russia’s detriment and Europe’s benefit.

That’s why Russian agents attempted to manipulate Americans’ opinions about pipelines, fossil fuels, fracking, and climate change. The American people deserve to know if what they see on social media is the creation of a foreign power seeking to undermine our domestic energy policy.

A spokesman for Twitter said the company had “fully cooperated” with Smith’s committee, including by searching for energy-related tweets from accounts that appeared affiliated with Russia’s Internet Research Agency. In an email to The Daily Signal, the spokesman said:

In our report to Chairman Smith we noted that a small subset (413) of these accounts participated in conversations related to energy, that their total volume of tweets was relatively small (5,594 original tweets, 2,223 retweets), and that these tweets represented an extremely small portion of the broader discussion of energy issues on Twitter.

For example, on one of the most active days, the IRA tweeted about energy issues 81 times total, compared to a total volume of 173,349 energy-related tweets and retweets overall on that day, or approximately five one-hundredths of 1 percent (0.046 percent) of the total conversation.

Bonner Cohen, a senior fellow at the National Center for Public Policy Research, told The Daily Signal in a phone interview that Putin and other Russian leaders see U.S. development of fossil fuels as “a threat” and “is acting accordingly.”

“The committee’s report comes just as it was announced that U.S. oil production has hit an all-time high,” Cohen said. “Note that the Kremlin is targeting American oil and gas production, not wind or solar power, which the Russians correctly see as posing no threat to their geopolitical designs.”

By 2019, we will likely surpass Russia as the world’s largest oil producer. The economic and geopolitical benefits are nothing to scoff at. American households and businesses are benefiting from affordable, reliable power.

We’re using our energy dominance as soft power to reduce the ability for Russia to manipulate energy markets for political gain. A few tweets and some posters aren’t going to stop the energy revolution that’s occurring before us.

This report was updated to include Twitter’s response to a request for comment on the House committee’s report.