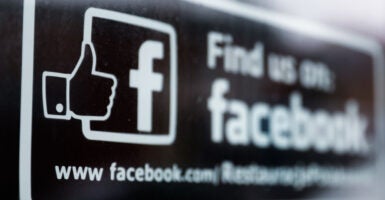 A "Find us on Facebook" sign is seen Jan. 26 in a restaurant in Krakow, Poland. So far at least, the social media giant hasn't claimed that the message "could mislead people.” (Photo: Jakub Porzycki/NurPhoto/Getty Images)

The most recent example: Facebook slapped a warning label on a Heritage Action for America video showing President Joe Biden talking about stopping oil drilling, asserting that “[i]ndependent fact-checkers say this information could mislead people.” Facebook then linked to an AFP piece that didn’t address the content of the video.

What’s almost amusing about that is that the Heritage Action video is in Biden’s own words. You can watch for yourself:

Biden might have been trying to mislead people, but that’s clearly not what the Facebook label was about.

“Heritage Action simply highlighted President Biden’s own words in a video, and what happened next is atrocious. Facebook’s ‘fact-checkers’ flagged our post for ‘misinformation’—the very words of Biden,” Heritage Action Executive Director Jessica Anderson told The Daily Signal. “Silicon Valley has a chokehold over our daily lives, and every American should be concerned by Big Tech’s out-of-control influence.”

(Heritage Action for America is the grassroots partner organization of The Heritage Foundation, for which The Daily Signal is the news outlet.)

The video illustrates the point that the administration has been unfriendly to increased oil drilling and has prioritized “renewable” green energy over national energy independence.

Until recently, the Biden administration was more than happy to promote this policy pivot.

On Biden’s first day in office, the Interior Department ordered a pause on new oil drilling permits. The administration then aggressively increased regulation on the oil industry.

That in no small part is why the administration’s claim that there are 9,000 unused oil permits for drilling on public lands is so misleading, as Harold Hamm explained in The Wall Street Journal:

Thousands of those sites can’t be developed as they are held up in litigation. Others require new permits and leases to make a full unit. Thousands more await approval. Conservatively, our data tells us the number of available permits ready for production today stands closer to 1,500, and many of those are already drilling. No leases have been issued for federal land since 2020.

The Biden administration, of course, is desperate to peddle a narrative that the massive surge in inflation and gas prices that began a year ago are entirely the fault of the Russian invasion of Ukraine and Russian President Vladimir Putin.

Now that a serious international crisis has revealed the cost of Biden’s decisions on both domestic consumers and our foreign policy, the administration and its Big Tech allies seemingly want to promote a message that we all just imagined that Biden talked about getting rid of fossil fuels.

It’s hard not to conclude that Big Tech companies aren’t simply doing what they can to amplify the message of an administration and a political party they’ve so heavily supported.

Slapping a label on a Heritage Action video calling it misleading is itself misleading, and is just the tip of the iceberg of what Big Tech is up to. The tech titans’ willingness to step into domestic policy debates and arbitrate what is right and wrong and who is worthy of being listened to and who should be silenced has only continued growing.

This certainly isn’t the first time Big Tech companies have gone after Heritage and The Daily Signal. YouTube censored a Daily Signal article from 2017 in which a doctor talked about transgenderism.

That these situations have become so common and one-sided makes one wonder: Is it acceptable that Big Tech has so much power over information and debate both domestically and across the globe?

Recently, Facebook and Instagram announced that they would allow posts calling for violence against Russians in the context of the war in Ukraine, including calls for the death of Putin.

It’s unsettling that the parameters of acceptable speech about war and serious events are being left up to a handful of powerful tech companies.

Given the uneven enforcement of rules about which “bad guys” deserve calls for death, it isn’t surprising to see these same companies deciding which information they promote or label “misinformation” for ideological or other reasons.

Putin still has a presidential account on Twitter, while former President Donald Trump has been banned by nearly every social media platform. Why is that? Twitter has suspended the accounts of sitting members of Congress, too, while the likes of Iran’s Ayatollah Khamenei remain active.

Big Tech’s often arbitrary and certainly opaque decisions on who to ban, censor, and “fact-check” nearly always go in a direction that favors left-wing ideology and narratives.

This trend becomes even more disturbing when its decisions always seemingly align with the preferences of the political party in power.

The bottom line is that Big Tech has become a menace and a threat to free speech and debate in America.