Thanks to This Change, Houses of Worship Can Now Get Disaster Relief 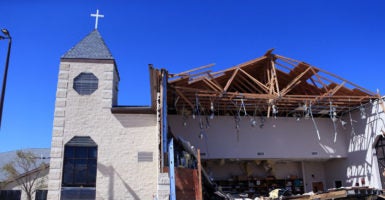 When Hurricane Harvey made landfall in Texas in late August, local churches, synagogues, and mosques were there to help.

Despite suffering major damage themselves, houses of worship provided aid to their local communities and volunteered as staging grounds for private emergency response nonprofits and for the Federal Emergency Management Agency.

When the storm was finally over, and it came time to think about recovery, some houses of worship went to apply for federal emergency aid, only to discover that under its long-standing policy, FEMA would not even accept their applications.

But now after a lawsuit, Supreme Court intervention, and congressional action, houses of worship recovering from natural disasters such as Hurricane Harvey will be free to receive the same public benefits available to other nonprofits and get back to helping their communities.

For years, FEMA wouldn’t accept applications from these organizations, despite the fact that the agency had granted such aid to other nonprofit groups, such as “an octopus research center, a botanical garden, and community centers that provide sewing classes and stamp-collecting clubs.”

The lawsuit came on the heels of the Supreme Court’s decision last June in Trinity Lutheran v. Comer, in which the court ruled 7-2 that under the free exercise clause of the First Amendment, the government cannot exclude organizations from public benefits simply because they are religious.

After a district court ruled against the Texas churches in early December, Becket filed an emergency request with Supreme Court Justice Samuel Alito. The Supreme Court asked FEMA to respond to Becket’s request for an injunction by Jan. 10.

Instead, the agency published a new policy before the deadline and announced to the court on Jan. 3 that it had reversed its policy and would include houses of worship. Houses of worship of all creeds that were struggling were finally considered eligible for federal aid.

However, without legislative action, FEMA could still revert to its previous policy at any time, leaving these organizations vulnerable to be excluded in the future.

Fortunately, Congress took action to ensure that these groups would have access to the assistance they so desperately need. Congress amended the Stafford Disaster Relief and Emergency Assistance Act to explicitly state that both houses of worship and religiously affiliated schools are eligible for federal disaster aid.

This change in policy puts our nation in a better position to recover from devastating natural disasters.

Looking at the aftermath of Harvey, former Texas Gov. and current Energy Secretary Rick Perry said, “The models that we’ve had historically, you can throw them out the window. This is going to be a really, really long recovery. … So the faith-based community may play one of the most important roles in this, long term. And that’s what they’ve historically done.”

Why are faith-based groups so important to disaster relief?

Such groups are uniquely situated to serve communities in need, owing to their firsthand knowledge of affected areas and their recognition within the community. Furthermore, they can minister to the full range of needs experienced by victims—material, emotional, and spiritual.

These organizations also maintain a presence in recovering communities after federal agencies leave, making them essential to long-term rebuilding efforts.

When faith communities have the resources they need to rebuild, they have an increased capacity to invest in the recovery of their local neighborhoods.

That’s why this change in federal policy is good news for those recovering from last year’s devastating hurricane season and beyond. It enables American communities to do what they do best—namely, pull together in times of crisis, live as neighbors, and lend one another a helping hand.

It’s a win for religious liberty—and for everyone.