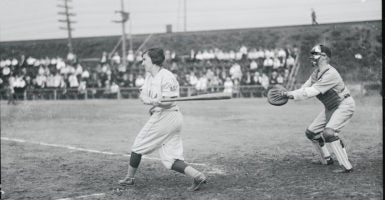 Captain Mary Gilroy of the Philadelphia Girls Baseball team at bat in the game against the Fire Department Nine of the Quaker City. The girls play a real snappy game and boast of the best girl pitcher in the game, in the person of Ada Jagers. The girl players wear regulation baseball uniforms, including spike shoes. (Photo: Bettmann /Contributor/Getty Images)

Twenty-five years ago, the baseball news was more upbeat. On March 31, 1995, Major League Baseball players agreed to end a 232-day strike that had kept fans shut out for 938 games—including the 1994 World Series.

In the absence of any live games to watch today—and with Women’s History Month drawing rapidly to a close—let’s look back at some of the pioneering women who proved that America’s pastime isn’t just “a man’s game.”

While Arlington was proving she could hold her own on the men’s field, a former teammate of hers was proving a woman could make her way up baseball’s corporate ladder.

Maud Nelson began her professional career at the tender age of 16, pitching for the Boston Bloomer Girls. In 1911, the 29-year-old Nelson became owner-manager of the Western Bloomer Girls and a professional scout, recruiting players for both men’s and women’s professional teams. She worked in the sport for two more decades before retiring.

On April 2, 1931, 17-year-old Jackie Mitchell went to the mound for the Chattanooga Lookouts, a Double-A men’s team, in an exhibition game against the New York Yankees. She proceeded to do the seemingly impossible: She struck out Babe Ruth. Smithsonian Magazine recounts the story this way:

First up was Ruth, who tipped his hat at the girl on the mound ‘and assumed an easy batting stance,’ a reporter wrote. Mitchell went into her motion, winding her left arm ‘as if she were turning a coffee grinder.’ Then, with a side-armed delivery, she threw her trademark sinker (a pitch known then as ‘the drop’). Ruth let it pass for a ball. At Mitchell’s second offering, Ruth ‘swung and missed the ball by a foot.’ He missed the next one, too, and asked the umpire to inspect the ball. Then, with the count 1-2, Ruth watched as Mitchell’s pitch caught the outside corner for a called strike three. Flinging his bat down in disgust, he retreated to the dugout.

Mitchell wasn’t through, though. The next batter she faced was Lou Gehrig. She struck him out, too.

The fans ate it up, but Major League Baseball Commissioner Kenesaw Mountain Landis had seen enough. He revoked Mitchell’s contract with the Lookouts, claiming the sport was “too strenuous” for women. Tell it to the Babe!

Thankfully, not everyone in Major League Baseball was down on women in sport, and when World War II broke out, they got another chance.

During the war years, more than 2,000 minor league players traded in their team jerseys for military uniforms. As a result, many of the teams folded.

Trying to fill the void—and the nonrevenue-producing stadium seats—Philip K. Wrigley, owner of the Chicago Cubs, organized the All-American Girls Professional Baseball League, later immortalized in the film “A League of Their Own.”

Wrigley’s gambit worked—for the owners, the players, and the fans. According to the women’s Players’ Association, the typical game attracted 2,000-3,000 fans a game. In 1946, an Independence Day double-header in South Bend, Indiana, drew a crowd estimated at 10,000.

The All-American Girls league folded in 1954, but women have continued to break barriers and achieve success in the game.

More recently, Jessica Mendoza, a six-year veteran of the U.S. women’s national softball team, become the first female commentator to work an MLB postseason game and the first to serve as a World Series game analyst on national radio.

As Women’s History Month draws to a close with Americans deprived of baseball for the first time in a quarter-century, it is worth remembering that women have worked for over a century to carve a place for themselves in the great American pastime. And they have succeeded, through a combination of grit, talent, and determination.

That’s an all-American attitude—the same attitude that will enable us to overcome COVID-19, return to normalcy, and once again hear those beautiful words, “Play ball!”