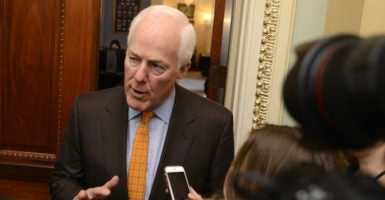 Sen. John Cornyn says his opposition to the nominee for deputy director of the Office of Management and Budget was not personal, but rather leverage to secure federal funds for Texas, which was devastated by Hurricane Harvey last summer. (Photo: Mike Theiler/UPI /Newscom)

A senator from Texas is no longer holding up the nomination of President Donald Trump’s pick to be deputy director of the Office of Management and Budget.

“He’s lifted his hold on the nomination of Russ Vought,” an aide to Senate Majority Whip John Cornyn, R-Texas, confirmed to The Daily Signal in an email Friday.

Cornyn said his opposition to Vought was not personal, but rather leverage to secure federal funds for Texas, which was devastated by Hurricane Harvey last summer, as The Daily Signal previously reported.

Solely to ensure the next #Harvey aid request from OMB will satisfy Texas's needs IDed by @GovAbbott @tedcruz & me https://t.co/HIn4qWU3Z0

After Congress passed $90 million in disaster relief funding Friday morning as part of a budget deal pushed by Republican and Democratic leaders that will raise caps on spending by $300 billion over two years, Cornyn released his hold.

Conservative groups, such as the Conservative Action Project, have criticized Cornyn’s opposition of Vought, a former staffer for Vice President Mike Pence when Pence was still a congressman from Indiana. Vought also previously worked for Heritage Action for America, the lobbying affiliate of The Heritage Foundation.

“This behavior by Sen. Cornyn is unbecoming a senator who wants to be the next Republican leader in the Senate and who professes to be a principled conservative,” an October memo from the Conservative Action Project said.

During his confirmation hearings in June, Vought was publicly attacked by Sen. Bernie Sanders, I-Vt., over his Christian beliefs. Sanders attacked Vought after asking the nominee about an article he wrote on Muslim theology.

More than 50,000 individuals so far have signed an online petition asking Sanders to apologize.