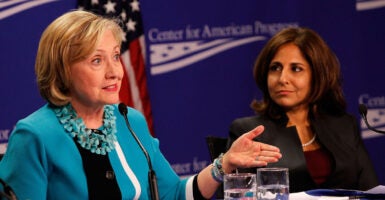 Neera "Tanden is one of the architects of Obamacare, [and] has been described as a [Hillary] Clinton loyalist," says former South Carolina Gov. Nikki Haley. Pictured: Former Secretary of State Hillary Clinton and Center for American Progress President Tanden at a panel discussion on Sept. 18, 2014 in Washington, D.C. (Photo: Paul Morigi/WireImage/Getty Images)

“Tanden has shown bad judgment in the past. She said that @realDonaldTrump is ‘part of [a] conspiracy against [the] US’ & has a track record of disparaging Rep Senators,” Haley tweeted Tuesday.

“There’s a saying that ‘personnel is policy,’ which is why Biden’s nomination of Tanden is deeply concerning,” Haley tweeted.

Biden picked Tanden to be the director of the Office of Management and Budget for his administration, The Wall Street Journal reported. Tanden is the leader of a left-leaning think tank, the Center for American Progress.

“Biden’s pick for budget chief is Neera Tanden. Tanden is one of the architects of ObamaCare, has been described as a Clinton loyalist for her years of service to Hillary Clinton & spent years leading a liberal think tank where she oversaw proposals like ‘Medicare Extra for All,’” Haley also tweeted Tuesday.

“Why did he lie about this? Because he knows people have intuitive sense Russians did enough damage to affect more than 70K votes in three states,” Tanden tweeted in 2017.