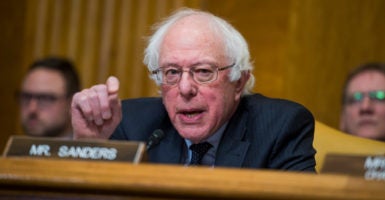 President Donald Trump’s nominee for a key budget position, stalled by senators on both sides of the aisle, finally will get a vote next week.

The Senate likely will confirm the president’s nomination of Russ Vought to be deputy director of the Office of Management and Budget after a cloture vote Monday.

During Vought’s confirmation hearing in June, Sanders raised suspicions based on Vought’s Christian faith, declaring that he “is really not someone who this country is supposed to be about.”

During the hearing, Sanders said:

You wrote, ‘Muslims do not simply have a deficient theology. They do not know God because they have rejected Jesus Christ, His Son, and they stand condemned.’ Do you believe that that statement is Islamophobic?

In his response, Vought said:

Absolutely not, Senator. I’m a Christian, and I believe in a Christian set of principles based on my faith. That post, as I stated in the questionnaire to this committee, was to defend my alma mater, Wheaton College, a Christian school that has a statement of faith that includes the centrality of Jesus Christ for salvation. …

Nevertheless, Sanders concluded, “I would simply say, Mr. Chairman, that this nominee is really not someone who this country is supposed to be about.”

After the interaction, more than 50,000 people signed an online petition from the Family Research Council calling for Sanders to apologize, but the 2016 presidential candidate did not.

In October, Cornyn placed a hold on a confirmation vote for the Vought nomination as a way to gain more disaster relief money for Texas after Hurricane Harvey struck.

Cornyn explained in a tweet at the time that the hold was: “Solely to ensure the next #Harvey aid request from OMB will satisfy Texas’s needs IDed by @GovAbbott @tedcruz & me.”

Earlier this month, after Congress passed $90 million in disaster relief as part of a bipartisan budget deal, Cornyn’s office confirmed to The Daily Signal that the No. 2 Republican in the Senate had released the hold on Vought.